Coming to a Battlefield Near You: Swarms of Killer Drones 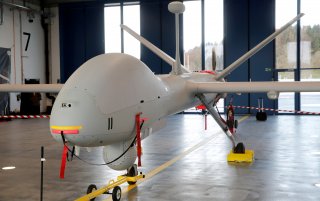 X-61A Gremlins is an unmanned aerial vehicle being developed for the Defense Advanced Research Projects Agency, also known as DARPA. It is intended to perform much the same mission as other UAVs—intelligence gathering, surveillance and reconnaissance, target attack, suppression of enemy air defenses, as well as close air support. While these types of missions are not in any way unusual, what is different is how it will be deployed and recovered.

The X-61A is to be air-deployed and air recovered. It is also to be “a reusable unmanned platform…Its payload and propulsion systems can be reused, while the low-cost airframe and other subsystems can be replaced at end-of-life.”

In January, the X-61A Gremlins completed its first test flight. According to a DARPA press release, groups of these, or similar UAVs “would launch…from multiple types of military aircraft while out of range from adversary defenses. Once Gremlins complete their mission, the transport aircraft would retrieve them in the air and carry them home, where ground crews would prepare them for their next use within 24 hours.” It’s essentially a cheap, reusable, air-recoverable drone.

Although scanty on details, the final in-air recovery system would probably be similar to how planes are aerially refueled. A “mothership” plane would extend a probe with a clamp attached to the end of the recovery cable. The clamp would then in all likelihood attach to the nose of the UAV and reel it in towards the plane.

Using a UAV multiple times requires regular maintenance. DARPA specified that “once Gremlins complete their mission, the transport aircraft would retrieve them in the air and carry them home, where ground crews would prepare them for their next use within 24 hours.”

Though recoverable and reusable, a Gremlins loss would not be catastrophic in the same way that losing a fighter jet and pilot would be, or as much of a financial hit as losing a high-tech drone would be.

Because the air-captured UAV concept is in it’s beginning stages, not a whole lot is known about the program. However, DARPA did say that “the vehicle performed well, giving us confidence we are on the right path and can expect success in our follow-on efforts.” Scott Wierzbanowski, the program manager for Gremlins in DARPA's Tactical Technology Office positively elaborated, saying “we got a closer look at vehicle performance for launch, rate capture, engine start, and transition to free flight. We had simulated the performance on the ground, and have now fully tested them in the air. We also demonstrated a variety of vehicle maneuvers that helped validate our aerodynamic data.” So far, so good.