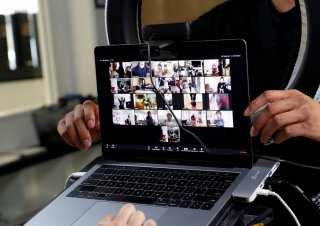 Standalone web cameras are one of those technologies that seem like they're from another era before they had their functions subsumed by other devices. In the case of webcams, most new laptop computers have included their own cameras for many years, making a separate camera mostly unnecessary.

But now, for perhaps obvious reasons, webcams are suddenly in major demand.

Research firm NPD Group, which follows the consumer electronics industry, wrote in a blog post at the end of March that, in the early days of social distancing in the first half of March, computer equipment saw major sales gains. Sales of computer monitors doubled year-over-year, while mice and keyboards also jumped. And webcams saw 80,000 units sold at retail in the first weeks of March, which nearly doubled the total from the year before.

These numbers are only from early March and have likely increased since social distancing has both lengthened and deepened.

With Zoom calls and other video conferencing suddenly becoming a huge part of many people's lives, there's a clear demand for products that produce higher-quality images. The New York Times and other outlets have even published tutorials for "how to look your best on a webcam."

Meanwhile, The Verge reported this week that webcams are completely sold out across several major retailers, which has led to a major secondary market in the items with huge markups. The sort of devices that used to sell for around $25, the site said, are now being offered for over $100 on Amazon's reselling channels.

Logitech, a top manufacturer of the devices, told that site that they are working to ramp up production and distribution of the webcams. The company's spokesperson also told the site that there's been some price gouging on the products by "bad actors."

Even before the start of social distancing, high-quality standalone webcams have been utilized by some users who host video shows or otherwise need to be on camera for professional reasons, with better quality than what is available on a standard laptop.

Business Insider ranks the Logitech C920S as the best overall webcam, stating that it "serves as an excellent update to its predecessor, now adding a privacy shutter to a webcam with already fantastic resolution and easy setup." It retails for $69.99, although the website of B&H Photo and Video lists it as not available until June.