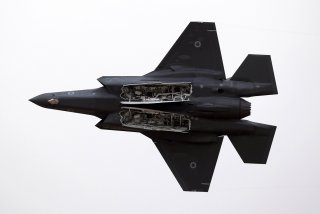 Israel and the United Arab Emirates began to normalize ties in August in a deal that was pushed by the Trump administration and which saw the first commercial flight land in Abu Dhabi from Tel Aviv. However, the agreement has continued to be overshadowed by controversy in Israel that alleged Israeli Prime Minister Benjamin Netanyahu accepted U.S. F-35 sales to the Emirates as part of the agreement. Netanyahu has denied that Israel gave its consent to the potential F-35 deliveries, but much of the discussion in Israel has become about domestic politics than the realities of how such sales might be approved in Washington.

The reports in early September revealed that the controversy that erupted in the days after the August 13 announcement of a momentous change in diplomatic relations between Israel and the Gulf, won’t go away for Netanyahu.

It began with reports at Yediot Ahronot, the country’s largest print newspaper, a media outlet often critical of the Prime Minister. The paper continues to allege that Israel has come to accept the concept of the F-35 sales and that “Israel’s security establishment is now debating which compensation package to demand from Washington.”

Israel has long demanded and received a qualitative military edge from Washington, a legacy of a Cold War-era alliance in which Israel was supported by the U.S. as a key ally and Israel’s enemies often received Soviet military support. In the era of the global war on terror, this alliance shifted as Israeli defense technology, some supported by the U.S., began to be important to the United States. For instance, the Trophy active protection system is on U.S. tanks and Iron Dome is being examined by the army. U.S. and Israeli defense companies, from Lockheed Martin to Israel’s Rafael, Elbit and IAI, often work on projects and sales together.

The F-35 is a crowning achievement of this relationship. Israel and American pilots have trained together several times in unprecedented cooperation. The F-35 is being sold globally but Israel already has two squadrons. A total of fifty planes will eventually be delivered to Israel and in the coming years, Israel could opt to buy more. The only other country in the region that was part of the F-35 program was Turkey but it is now on hiatus because Turkey is buying Russia’s S-400 air defense and has become increasingly belligerent toward NATO member Greece. Turkey recently hosted Hamas leaders and the State Department was clearly not impressed. As such it is the UAE or possibly even Saudi Arabia that might be likely future candidates for the F-35.

F-35 sales take time and even with an agreement the warplanes likely wouldn’t reach Abu Dhabi for years. Trump has made pushing arms sales a key component of his transactional foreign policy. As such the UAE shopping list is not just about F-35s but also Reaper drones, which it has wanted for a decade or more, and possibly EA-18G Growlers, an airborne electronic attack jet.

The trade-off being discussed now in Israel is more defense products for Jerusalem, a kind of deal sweetener that enables the defense establishment or Netanyahu to save face. In the end, the delivery of F-35s doesn’t erode Israel’s qualitative military edge because the UAE was never an enemy state. In fact, U.S. F-35s that have been practicing with Israel to fly from the UAE’s Al-Dhafra base. The UAE, US, and Israel are already knitted into the same strategic outlook and defense paradigm anchored in the close relations between the U.S. and Israel and the U.S. and the UAE. Both Israel and the UAE view groups such as Hamas and Hezbollah as enemies and both have tensions with Iran and Turkey.

Israeli Defense Minister Benny Gantz, leader of a party that was the main opposition to Netanyahu last year, spoke to his American counterpart Mark Esper on September 4. Israeli media continues to discuss what might be in the future F-35 deal with the UAE. A former internal intelligence head told Israel’s i24 on September 2 that the F-35 version for the UAE could be different. Israel already has a unique version of the advanced warplane, so that is not surprising. The question for Israeli politicians continues to be whether Netanyahu “secretly” consented to the F-35 deal, which he denies.

There are concerns that while the Trump administration wants the agreement that Congress could upend or slow down any deal. This could be at the behest of Israel or due to other concerns. The overall picture is that Israel’s various factions, including powerful voices in the defense and intelligence establishment, are reconciled to the F-35 sales to the UAE. The question of what “off-sets” Israel might get in return is the next step for discussions.

With U.S. elections in November and the peace agreement being formalized between Abu Dhabi and Jerusalem, timing is still everything. Will sales be announced before the election? That is a key question, as well as political fallout in both the Knesset and Congress. This illustrates that when it comes to big-ticket arms sales the issue is not just about security and U.S. national defense strategy, there are multiple factors at play. If the F-35s help creates a new security framework between the U.S., Israel, and the UAE, one that appears to be favored by Trump advisor Jared Kushner and Secretary of State Mike Pompeo after recent trips to the region, then the real story will be that this 5th generation weapons platform has paved the way for a new grand alliance anchored in the U.S. and including the Gulf and Israel, as well as potentially incorporating countries like Egypt and Greece. Where once the U.S. had the Baghdad pact, this might be the F-35 pact.