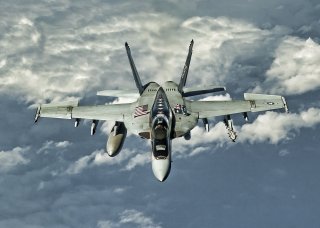 Last month aerospace giant Boeing delivered the final Block II F/A-18E/F Super Hornet to the United States Navy, where the aircraft went from the production line and headed straight to Strike Fighter Squadron 34. In total, the Navy received 322 single-seat F/A-18Es and 286 two-seat F/A-18Fs as part of the Block II program, which began in 2005.

Now less than a month later, the first two F/A-18 Block III test jets are also heading to the Navy, which will use the pair of jets for carrier testing of Block III capabilities. Boeing has announced that the two jets have completed final assembly at the company's production facility in St. Louis, and will be delivered to the Navy in the coming weeks. Testing will reportedly commence at both NAS Patuxent River and Naval Air Weapons Station (NAWS) China Lake.

Boeing developed the Block III Super Hornet to complement existing and future air wing capabilities, and the Navy will use these to test and explore new concepts of operation. These test jets do not feature the full set up upgrades but do include the new advanced cockpit system's 10x19-inch touchscreen display that is similar to a large tablet. It replaced many of the traditional buttons and knobs, but it will also enable the pilot to see, track, and target multiple long-range targets.

The Block III jets will also receive new satellite communications systems and will have the ability to utilize podded infrared search and track (IRST) sensors, The Drive reported.

The aircraft will also be equipped with enhanced network capability, have a longer range, and reduced radar signature. The Block III Super Hornet also has shoulder mounted conformal fuel tanks, which can carry 3,500 pounds of additional fuel while reducing drag and those allow the aircraft to operate longer, go faster and carry additional weapons.

The U.S. Navy awarded Chicago-headquartered Boeing a $4 billion contract in March of 2019 for the multi-year procurement of 78 F/A-18 Block III Super Hornets, including 61 single-seat E and 17 two-seat F, which will be delivered through 2024.

The fighter has proven itself repeatedly during numerous operations where it has been the preeminent platform performing multiple missions.

The U.S. Navy has announced plans to upgrade a significant number of its remaining 540 Super Hornets to the Block III standard. Boeing started converted existing Block II Super Hornets to Block III earlier this year, which will extend the fighter's life from 6,000 hours to 10,000 hours.