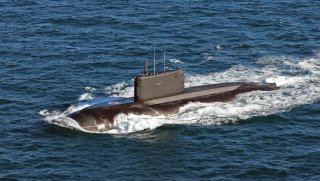 During the Cold War, the Soviet Union operated one of the largest submarines forces in the world. At its peak in 1980, the force numbers 480 boats. Today, the Russian Navy’s submarine force is a shell of that former self, but that doesn’t mean that it should be casually dismissed—especially as Moscow has put renewed effort into modernizing its submarine fleet.

The fourth modified Project 636.3 Varshavyanka-class submarine Ufa is set to be floated out by the end of this year, for service with the Russian Pacific Fleet, the press office of the Admiralty Shipyard reported on Monday.

“By now, the hull sections of the Ufa submarine of the Pacific series have been joined, and the main cable is being laid. The vessel is set to be floated out before the end of this year,” the press office said in a statement to Tass.

The news agency reported that a contract for building a series of Project 636.3 six diesel-electric submarines for Russia’s Pacific Fleet was signed in September 2016, while the lead submarine of the class, Petropavlovsk-Kamchatsky, was delivered to the Russian Navy on November 25, 2019. A second Project 636.3 submarine, Volkhov, was subsequently handed over to the Fleet on October 24, 2020, while the third submarine Magadan entered shipbuilders’ sea trials on June 25 this year. It is set to be delivered to the Russian Navy this coming November.

The modified Project 636.3 Varshavyanka-class submarines (NATO reporting name: Improved Kilo-II) have been referred to as the third generation of large diesel-electric underwater cruisers. The boats, which have been nicknamed “Black Holes“ by the U.S. Navy, were designed to operate in shallower, coastal waters and are tasked with anti-ship and anti-submarine warfare. Each submarine carries six torpedo tubes, and they carry a crew of fifty-two submariners.

The Improved Kilo-II class is noted for its higher combat efficiency compared to their predecessors, and this includes the combination of acoustic stealth and the target detection range, as well as the latest inertial navigator, advanced automated information and control system, more powerful high-speed torpedo, and improved missile armament. The Project 636.3 submarines are 74 meters long and displace more than 3,900 tons, and due to their strong hull, the submarines have an operational depth of 240 meters and can dive to a maximum depth of 300 meters. The submarines have an operational range of up to 7,500 miles. The Russian submarines have been considered among the world’s quietest underwater cruisers, and the boats can travel at speeds of up to twenty knots, while they have sea endurance of forty-five days.