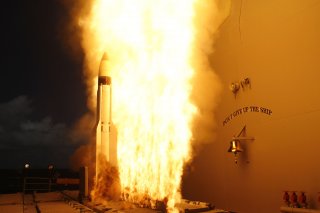 Drawing upon fast-evolving computer algorithms enabling newer and newer levels of autonomy, engineers seek to construct a large drone boat with an unprecedented capacity to perform missions without needing human intervention. A larger drone, for instance, could accommodate larger weapons systems, sensors, and radar technologies to search for incoming targets at longer ranges, carry munitions, and fire large-weapons against an array of targets.

While many of the specific systems and requirements for the boat have yet to be determined, a larger platform might be able to integrate Vertical Launch Systems able to fire Tomahawks, SM-3s or other high-performance interceptors. Perhaps such a platform might even be built with an ability to use Aegis radar systems and track incoming ballistic missiles from the outer boundaries of the earth’s atmosphere. Of course, efforts to build a platform with these systems effectively would hinge upon the existence of “hardened” networking to facilitate human decision-makers operating in a role of command and control.

Of course, an unmanned system could operate in higher risk areas more vulnerable to enemy fire while leaving sailors at safer stand-off distances, yet such a platform brings the promise of an even broader mission scope. An LUSV could operate in a way that enables more distributed missions, a tactic aligned with the Navy’s Distributed Maritime Operations strategy.

As part of this, an LUSV could perform a “mothership” role to an extent, using AI-enabled algorithms and advanced networking to coordinate a large fleet of dispersed unmanned systems of all sizes. Manned systems will of course be needed, yet an LUSV could directly operate in the line of enemy fire and potentially protect manned ships with interceptors, weapons and over-the-horizon sensors.

The mission scope for the LUSV will also be further refined due to the emergence of new applications of AI which, among other things, can organize targeting and sensor information across an entire fleet in near real-time. Emerging technologies are already bringing the Navy’s “Ghost Fleet” concept to new heights by enabling groups of unmanned systems to coordinate missions autonomously, share information, perform analytics on new data and share combat-sensitive data across the force, all while needing little or no human intervention.

The Navy’s LUSV is intended to fortify and expand this kind of mission. For example, a forward operating drone boat could come across an enemy surface formation and, in a matter of seconds, send information to a large drone boat able to deliver targeting coordinates to submarines, aerial drones, large manned surface ships and smaller, maneuvering attack drones.

“These studies contracts will allow the Navy to harvest the learning from our land- and sea-based prototyping efforts and work directly with industry to refine the requirements for an affordable, reliable, and effective Large Unmanned Surface Vessel and reduce risk for a future design and construction competition,” Capt. Pete Small, program manager, Unmanned and Small Combatants at Naval Sea Systems Command, said in a Navy report.