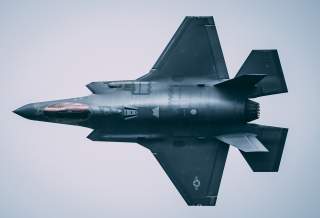 The US Air Force is preparing to fire a fighter-jet configured laser pod from the ground as a key step toward achieving its goal of firing lasers from jets on combat missions in the air.

As a part of its preparation, the service is refining its combat strategy, tactics and concepts of operation to accommodate the rapid emergence of laser weapons, technologies which promise to alter the landscape of modern warfare and substantially expand the envelope of attack possibilities for fighter jets.

The Air Force Research Lab, which has been leading the effort from Kirtland Air Force Base, has been working on laser weapons development for many years now. They have already conducted several ground-fire tests and are now preparing for initial air-launched demonstrations. This next test, according to AFRL information, will assess the ability of a fighter-jet configured weapons pod to successfully target and fire lasers, in anticipation of airborne integration.

Solid-state laser weapons rely purely upon electricity and do not need to draw upon certain specific chemicals as other lasers do. Essentially, they can disable or, if needed, incinerate a target with tremendous heat.

Perhaps of greatest significance, laser weapons are entirely scalable, Blaylock added. Scalability is achieved in many instances by combining or merging several beams into one, AFRL states.

A Congressional Research Service report from earlier this year on Directed Energy Programs also details some of the key advantages and limitations of fast-evolving laser weapons.

As developers advance miniaturization of mobile, onboard power system, fighters and cargo aircraft will increasingly operate with an ability to carry a “deep magazine” without adding large amounts of weight to a plane. This brings a number of distinct advantages, such as greater fuel efficiency, speed and maneuverability. A transportable arsenal of laser weapons might remove the need for a fighter jet to travel with large amounts of heavy bombs and missiles, allowing the aircraft to operate with increased air-to-air maneuverability and extended mission time.

(Some portions of this story first appeared in January.)