Companies Want to Go Green and Save the Planet, but They Need Their Works Onboard Too 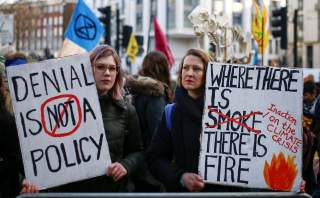 A lot of companies say they care about the environment and commit to certain goals but don’t end up doing much about it.

A whopping 78% of companies in the Standard & Poor’s 500, for example, issued sustainability reports in 2018 and 66% of all U.S. companies committed to the U.N.‘s Sustainable Development Goals in 2017 through either explicit statements about the goals or implicit actions that support them.

But relatively few say they’ve actually embedded the sustainability goals into their business strategies or into departments such as communications, human resources and supply chain management, corporate functions that can play a huge role in boosting sustainability. A 2016 report found that just 2% of companies actually achieve their sustainability goals.

This matters because the Trump administration’s skepticism about the threat of climate change has made it clear that the federal government won’t be leading the charge to avert the worst of it. That means it’s up to companies to pick up the baton.

So what separates companies that succeed at becoming more sustainable from those that fail?

I spoke with over 100 CEOs, managers and regular employees at 25 multinational companies that have committed to becoming more sustainable in hopes of answering that question. My research, published in my book “Small Actions, Big Difference,” suggests it begins with a shared purpose – and winning over employee hearts and minds.

Part of the problem is that companies have made profit maximization their primary purpose for decades. That has made all other aims, such as sustainability, secondary and separate from a company’s main mission.

The result has been that companies tend to departmentalize sustainability efforts, depriving the company of the ingenuity and passion of the employee base in addressing one of the most complex problems of our times. Since sustainability permeates every aspect of a company’s operations – from procurement to disposal – it’s vital to embed a purpose promoting it in every department.

Perhaps not surprisingly, companies that want to achieve goals like reducing their carbon footprint or waste tend to do better when they make sustainability an integral part of their core purpose and communicate this commitment to the entire staff. That’s clear from a recent analysis I conducted of environmental, social and governance performance data on over 3,000 companies during a 10-year period. I found that companies that said they have an “overarching vision” that combines financial goals with social and environmental ones tended to perform better on a measure of their impact on the environment. They also tended to perform better financially as well.

Why? Because workers like a corporate purpose that trumps profit. Research has shown articulating a purpose beyond profit resonates with a company’s workforce.

For my book, I spent countless hours over a period of five years interviewing executives, middle managers and factory workers to try understand what separates the companies making successful strides in reducing their environmental impact from those still struggling.

What I learned from the reams of interview data that I collected and transcribed is that the successful companies endow a sense of “sustainability ownership” in their employees so that everyone – from the mailroom to the boardroom – picks up the baton as part of his or her day job. And it all starts with defining a corporate purpose, the all-important question of “why do we do what we do,” something that three companies did particularly well.

When Paul Polman took over as consumer goods giant Unilever CEO in 2009, he realized that the company had to transition to a new business model that accounted for the environmental and social realities of today’s world in order to survive.

Working with his leadership team, he came up with a new purpose for Unilever: “to make sustainable living commonplace,” which was widely communicated to all workers using a variety of means from company YouTube channels to embedding “sustainability ambassadors” throughout the company.

The effort worked. Employees I spoke with clearly internalized and appreciated the new corporate purpose and culture. One factory worker in India put it succintly: “I would rather save lives than sell soap.”

Corporate executives credit this integration with Unilever’s success in becoming a greener company. From 2008 to 2018, the company says it cut greenhouse gas emissions by 52%, water use by 44% and waste by 97%. Like the financial results companies report, sustainability figures are audited and verified by accounting firms.

British retailer Marks & Spencer began incorporating sustainability into its operations in 2007 under the provocative name “Plan A” – because “there is no Plan B for our one planet,” the company said.

From my interviews I learned the company uses a variety of strategies to ensure the mission is embraced by every employee, in part by appealing to the heart. For example, Marks and Spencer sponsors trips into local communities where their stores are located to show the impact of a changing climate and organizes informal after-work drinks at local pubs to discuss the crisis in a personalized way.

The efforts have paid off. For example, the company says carbon emissions have plunged 75% since 2007 and waste is down 35% compared since 2009, with none being sent to a landfill.

Appeals to the head

At IBM, environmental goal setting has long been an integral part of the company’s sustainability strategy. In contrast to Marks and Spencer’s appeal to an employee’s heart, however, IBM primarily appeals to the head – and the bottom line – as you might expect from an information technology company.

When discussing proposed goals with business units, IBM’s corporate staff identifies opportunities for cost savings as well as revenue growth. This helps employees gain an understanding of the environmental drivers and objectives behind each goal as well as the business and societal benefits.

For example, consolidating multiple computer servers that aren’t well utilized into one larger and more energy-efficient server not only reduces energy demand and greenhouse gas emissions but also frees up space, electricity and cooling capacity to support new business.

Seeing this kind of data motivates workers to innovate on the sustainability front because they’re able to see how it’ll lead to more money and environmental well-being for the company – and ultimately greater financial rewards and a sense of contributing to a greater cause as well.

These types of initiatives helped IBM reduce its carbon emissions by a third from 2005 to 2018 and its nonhazardous waste by 68% since 2014. Almost 90% of the remaining waste gets recycled.

My interviews, countless surveys and scholarly research show employees – particularly younger ones – prefer to work at companies that serve a higher purpose.

The good news is that companies are increasingly vowing to pursue more than just profits and incorporating issues like protecting the environment and their communities into their purposes.

But it’s not enough to make promises. And even companies that sincerely want to do better can find it hard if they don’t bring their employees along for the ride. Small actions can lead to big difference.

This article by CB Bhattacharya first appeared in 2019 in The Conversation via Creative Commons License.