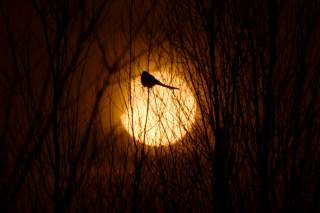 Bonjour! Ni hao! Merhaba! If you move to a new country as an adult, you have to work much harder to get past that initial “hello” in the local language than if you’d moved as a child. Why does it take so much effort to learn a new language later in life?

Our human ability to learn language slows down as we get older, but scientists are not sure how or why this happens. An unexpected way to understand this learning process might come from listening to birds sing.

After all, songbirds have a lot to learn. They don’t hatch knowing what songs to sing, or how to sing them. Instead, they must learn their species’ song. Young birds listen to adult birds and then practice copying the adult’s song syllables until they sound right. If they fail to learn an appropriate song, male birds will have difficulty attracting mates or defending their territories.

This process of vocal learning is remarkably similar to how humans learn language: Babies listen to their parents speaking and then practice making the same sounds by babbling. Because these processes are so similar, birds have long been used to study vocal learning.

However, while these learning processes are similar, the functions of speech and song are quite different. Human speech is complex and made up of many sounds that we use to convey an infinite number of ideas to each other. Birds only need to announce their presence to mates and rivals, yet their song can also be made of a repertoire of hundreds or thousands of unique syllables. What benefit could these more elaborate songs offer males?

Birdsong researchers have long thought that these elaborate repertoires are the product of sexual selection: If males that know more syllables attract more mates or repel more rivals, they’ll be more successful in the mating game. Then, the species should evolve larger syllable repertoires over time. Indeed, we have previously found that females seem to prefer the most verbose males primarily in species that already have a lot of syllables.

Learning With Ease – Within the Window

Songbirds have evolved to be incredibly diverse – their songs range from simple to complex, and their song-learning processes are similarly divergent. From species to species, the duration of the song-learning window varies widely.

Some songbirds, called closed-ended learners, can only learn song for a short period of time. For example, zebra finches must perfect their song by the time they are 90 days old. After that, they never change their tune. In contrast, open-ended learners, like the European starling, have very long learning windows. Humans might be somewhere in between – we can learn language easily for a number of years, but it becomes much more challenging in adulthood.

Why do some birds only learn for a short period of time, while others learn for life? How does a longer learning window affect their song? Could mating preferences, such as females preferring complex songs, affect the evolution of learning? As biologists who are interested in how learned behaviors change over time, we wanted to investigate whether the songs birds learn can be linked to how their brains evolve. This could provide a crucial link between how learning evolves and why learning language as a human adult is so difficult.

From an earlier study in a small number of species, we knew that open-ended learners know more unique syllables than those whose learning window closes sooner. This implied that song complexity and the learning window could influence one another’s evolution, but we had not yet shown that this was the case.

To investigate this possibility, we collected published field data to test whether the length of the song-learning window affected the evolution of song features such as song complexity, measured by the number of unique syllables that a bird sings. We also wanted to find an evolutionary order of events; did larger repertoires evolve before longer learning windows or vice versa?

We found that not only were song and syllable repertoires larger in open-ended learners, but they also evolved faster in these species relative to those that stopped learning before their first breeding season. Songbird species that learn elaborate songs with short learning windows quickly evolve either simpler songs or longer phases of learning. In contrast, species that learn simple songs during a longer learning window tended to evolve more elaborate songs or shorten the amount of time they spent learning.

Together, our findings support two ideas: First, more elaborate repertoires are easier to learn when birds learn for a longer period of time. Second, longer learning may be costly, because birds with small repertoires that can be quickly learned appear to lose their ability to learn for longer windows of time.

These intuitive results help us build our birdsong story. If sexual selection favors larger repertoires, then the growth of a species’ syllable repertoire gives a competitive edge to birds with longer song-learning windows. In other words, just by preferring fancy songs, birds could have changed the evolution of their brains, increasing their capacity to learn.

Do humans also have long learning windows because the evolution of our complex language and cultures depended on it? If language learning is so valuable, why does it get so much more difficult as an adult? Future research on birds and their brains could help scientists understand more about why.