Conditioning U.S. Aid to Israel Would Make Everyone Less Safe 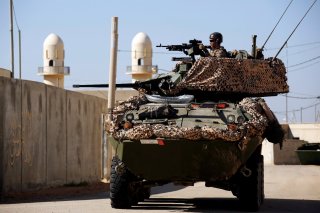 Calls for conditioning aid to Israel have gained momentum since Israel proposed—but postponed—extending sovereignty to parts of the West Bank this summer. However, placing additional restrictions on those funds would strain America’s most critical security relationship in the Middle East and be harmful to Palestinians and Israelis alike.

The security assistance that the United States provides to Israel directly benefits America’s strategic interest for regional stability and deterring major war. As the United States retrenches from the Middle East, its aid to a capable partner like Israel will only become more important to regional security. In this way, the assistance goes beyond supporting Israel and is also a means for promoting regional security and stability without deploying more American troops.

Since the Clinton administration, the United States has planned its foreign military financing (FMF) and missile defense cooperation with Israel through ten-year Memoranda of Understanding (MoU). The Clinton, Bush, and Obama White Houses all maintained a firewall between their policy disagreements with the Israelis and security assistance. Indeed, the Obama administration negotiated both a nuclear agreement with Iran that created tensions with the Israeli government as well as the current U.S.-Israel MoU. This MoU, which covers fiscal years 2019-2028, bolstered the vital bilateral relationship by outlining an unprecedented $33 billion of FMF and $5 billion in missile defense.

While MoUs are nonbinding, strong bipartisan majorities in Congress have generally appropriated funds per their terms. This precedent has held regardless of which political party controlled the White House or Congress. However, conditioning aid is a growing idea among those who see U.S-Israel relations primarily through the lens of the Israeli-Palestinian conflict. Their theory is that Washington could leverage its support to change how Israel spends the funds or push Israel’s leadership to make concessions to the Palestinians.

Yet, existing U.S. laws already specify that Israel must use U.S. military supplies for self-defense and sets rules for American weapons transferred to foreign countries. In the few instances where U.S. officials have investigated Israel’s operational use of American-made weaponry, they have done so with Israel’s full cooperation.

American defense assistance enables Israel to develop and purchase crucial missile defenses and tunnel detection technology. These technologies afford it the strategic patience to interrupt most attacks without initiating ground operations against their source in Gaza or Lebanon.

In fact, rather than being used against Palestinians, Israeli equipment purchased through American aid is more likely to help defend them. Missile defense funding has helped Israel develop and acquire Iron Dome, David’s Sling and Arrow batteries and interceptors that effectively protect the skies over the West Bank and Israel proper. Since 2016, the American and Israeli governments have cooperated on tunnel detection technology that the IDF has deployed on the border with Gaza and Lebanon. As a result of this innovation, Israel has destroyed roughly twenty tunnels, including one extending into Israel in October 2020.

If withholding these funds means that Israel has less access to valuable technologies and munitions, Jerusalem may launch preemptive but necessary actions to stop attacks on Israeli civilians. Without the defensive systems the MoU allows Israel to purchase, the IDF could have to divert weaponry to Gaza and away from the much-bigger threat from Hezbollah and Iran to its north.

In fact, U.S. security guarantees have encouraged Israel to take risks for peace. As President Bill Clinton aptly explained during a 1993 press conference with Israeli Prime Minister Yitzhak Rabin, he “has told me that he is prepared to take risks for peace. He has told his own people the same thing. I have told him that our role is to help to minimize those risks. We will do that by further reinforcing our commitment to maintaining Israel’s qualitative military edge.”

FMF has also enabled Israel to purchase the F-35 fighter aircraft, which it has used in Syria to stop Iran from proliferating advanced weaponry. More than any other ally, Israeli operations against Iran have rolled back Iranian military expansion and prevented it from building up weapons to Israel’s north that could provoke a regional war that harms both Israeli and U.S. interests.

In response to the growing frequency and volume of calls for conditioning these funds, the Jewish Institute for National Security of America (JINSA) recently released a report underscoring the importance of aid to Israel and ways to counter the arguments in favor of placing additional conditions on it. Congressional hearings, clearer language within authorizing legislation, and public statements from Defense and State department officials can clarify how aid to Israel contributes to Middle East stability.