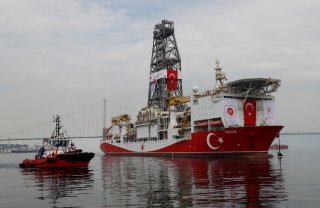 On October 17, while making a speech concerning the recent discovery of a new gas field in the Black Sea, Turkish President Recep Tayyip Erdoğan shifted focus, declaring that the way for peace to prevail in the Eastern Mediterranean “is to respect, recognize, and acknowledge the rights of Turkey and the Turkish Republic of Northern Cyprus.” This speech, in which issues of energy security co-occur with issues of sovereignty, identity, and ethnic conflict, epitomizes the multiple factors behind the recent tensions in the Eastern Mediterranean. A historic rivalry over these issues has evolved in size and complexity since the discovery of hydrocarbons in the Eastern Mediterranean in the last five years. Yet only passing reference is made to these former drivers of conflict in much of the coverage since August. While energy competition is an important role in the recent tensions, it is a recent addition to a conflict that primarily concerns issues of identity, sovereignty, and territory.

Historic tensions over the national identities and sovereign territory of each state play a seminal role in the current military posturing. The return of Turkish seismic vessels to disputed waters in the Aegean in early October was a direct response to the (now canceled) scheduling of Greek firing exercises on October 29 that coincided with Turkey’s Republic Day. Moreover, the location of the exercises (on various islands close to Turkey’s coastline) was perceived by Ankara as a violation of the 1923 Treaty of Lausanne—the foundational treaty establishing the modern Turkish state. In retaliation, Turkey announced (canceled) firing exercises on October 28, corresponding with Greece’s Ohi Day (celebrating national resistance against the Axis occupation). The coincidence of these military exercises with national holidays that (re)construct the modern identities of each state clearly demonstrates the influence of identity on the conflict.

Energy disputes are intrinsically linked to this competition over sovereign territory. The presence of the Turkish seismic vessel, the Oruç Reis, in contested waters around Kastellorizo and Rhodes since early-October is as much about contesting what Turkey perceives as Greece’s “maximalist” claims as it is about discovering oil and gas. The outlined area within the earlier NAVTEX delimiting the seismic activities of the Oruç Reis positioned the vessel less than half a nautical mile outside of Greece’s currently claimed territorial waters (6 nautical miles) off of Kastellorizo. This was a deliberate Turkish calculation to counteract a 1995 act by the Greek parliament which authorized its government to extend its sovereign waters in the Aegean Sea to 12 nautical miles. At the time, Ankara labeled this a casus belli; last week’s face-off between Greek and Turkish warships on either side of the 6nm boundary highlights how the conflict is underscored by contradicting territorial claims.

The two countries’ current stances over the Cyprus issue further reinforces the continued influence of identity on the conflict. Athens’ recent attempt to level sanctions against Turkey in last week’s European Council summit was not only due to the return of the Oruç Reis, but also the unilateral reopening of Varosha beachfront to the Turkish-Cypriot community in early October. The move, which violates UN Resolution 550 (1984), has caused widespread consternation within the Greek-Cypriot community and further strains Greco-Turkish relations, undoubtedly weakening the potential for dialogue and cooperation between the two sides. Most importantly, it undoubtedly reinforces Athens’ refusal to consider issues beyond the delimitation of maritime boundaries in future negotiations. Neither Cyprus nor Greece are likely to accommodate Turkey’s call for talks to encompass the Cyprus dispute, despite it being a cited precondition for talks by Turkey. The fact that Ankara seeks to address the issues of energy exploitation, maritime boundaries, and the Cyprus conflict in combination demonstrates that the current tensions extend far beyond simple hydrocarbon competition.

Yet competition over the exploitation of hydrocarbons in the disputed waters around Cyprus and Greek islands in the Aegean is also a salient driving force behind the recent hostilities. The November 2019 maritime treaty between Turkey and the Tripoli-based Government of National Accord (GNA) was intentionally designed to prevent the planned EastMed pipeline and counter-act Turkey’s sidelining (highlighted by Ankara's exclusion from the Eastern Mediterranean Gas Forum) by other regional states. Greece’s response to this—the signing of a new maritime accord with Egypt in early-August—contradicted this deal and was undoubtedly a catalyst for Ankara’s decision in August to send the Oruç Reis seismic vessel to contested waters.

At the same time, however, Turkey’s exclusion from the Eastern Mediterranean Gas Forum and the EastMed pipeline is due to much more than energy competition. Statements by Athens and Nicosia indicate that the pipeline is a “defensive” project, intended to limit Turkey’s growing influence in the Eastern Mediterranean by strengthening Greek and Cypriot claims to contested waters around southeast Cyprus and Crete. Moreover, the planned route of the pipeline—from the Leviathan and Aphrodite gas fields to Greece via Cyprus and Crete—spans an estimated 1,300 kilometers (making it the longest pipeline in the world) at an estimated cost of $7 billion. The limited economic and infrastructural viability of such a route indicates that the pipeline is more a geopolitical maneuver to counter Turkey than a project driven by economic incentives.

With the above points in mind, it is apparent that the conflict in the Eastern Mediterranean is as much, if not more, about identity and territory as it is competition over hydrocarbons. It is important not to overly focus on one explanation for the recent re-escalation in tensions since August. Numerous persuasive arguments can be found, including doctrinaire analyses of Blue Homeland and its increasing influence since 2016, the effect of changing polarity, Erdoğan’s domestic political maneuvering, and the aforementioned competition over hydrocarbons and energy security. These all possess significant merit and should be considered in combination. With these other mutually constitutive drivers in mind, greater attention should also be given to the role of identity in prolonging the most recent tensions.

Gareth Jonas is a Regional Security Analyst at Le Beck International, a geopolitical security consultancy based in the Middle East. He can be found tweeting about identity, ethnic conflict, and international security at @jonas_gareth.