Is Conflict Over Water Inevitable? 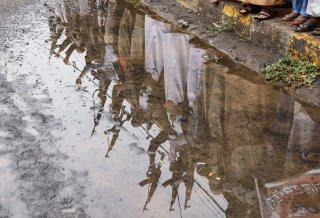 In 2012, the United Nations and European Union put out a joint report that discussed three major drivers of resource-based conflict: competition amidst resource scarcity, poor governance, and transboundary dynamics and pressure. All three of these challenges are seen in many contemporary conflicts.

For example, the Israeli-Palestinian conflict has been exacerbated by competition over water resources and both sides are fighting to control the supply of water to their respective citizens at one another’s expense. If Israel controls the water, then it’s more difficult for Palestinians to have access to it, and vice versa. The conflict over water has been compounded by the effects of climate change on both parties; Palestine, in particular, has been subjected to droughts, floods, and heatwaves which can lead to agricultural insecurity. In short, the Israeli-Palestinian conflict has expanded far beyond a seventy-year border dispute.

Similarly, water scarcity also impacts the Indian-Pakistani conflict. After a 2019 terrorist attack in Kashmir, India threatened to divert water from the Ravi River away from Pakistan. This is a direct violation of the Indus Waters Treaty, which stipulates that a commission will be created to resolve disputes between India and Pakistan over water. Because part of the Indus River flows through Kashmir, the conflict has largely been at odds with the treaty. Additionally, Pakistan has a greater dependency on the Indus than India. Thus, if India were to divert water resources, it would be extremely detrimental to Pakistani agriculture.

The Nagorno-Karabakh conflict has also had a harmful impact on the region’s environmental security and climate. Fighting in late 2020 led to an increase in forest fires through the use of incendiary weapons; the violence has also created water shortages in what is known to be a water-rich region. Previously, the region’s water pipes had fallen into disrepair as the 1992-1994 conflict made maintenance difficult. This has also led to now-chronic water shortages.

Another example is Yemen. Since the beginning of its civil war in 2015, Yemen has been experiencing a severe water deficiency. It was estimated in 2019 that 18 million people were in dire need of water, sanitation, and hygienic assistance. Furthermore, belligerents have been weaponizing water access through sieges and blockades of water access points. Yemen’s humanitarian disaster includes a cholera epidemic and chronic droughts brought on by climate change.

A potential Russian invasion of Ukraine will most certainly have a climate dimension to it. There have been fears that Russia will stop selling Europe natural gas if the invasion happens. While natural gas emits less carbon dioxide than traditional fossil fuels such as coal, it does leak methane into the atmosphere, which has been found to be the second most significant climate pollutant. Further, a potential natural gas shortage has the potential to lead to greater fossil fuel dependency, which is in direct contravention of Europe’s stated climate objectives. There is also the issue at hand of Ukraine controlling several natural gas pipelines that go into Europe from Russia, which are a major component of Russian exports. The gas pipelines are in contention because any sanctions imposed as a result of an invasion could lead to future pipes not being operational. There is also concern over increased air pollution as a result of the conflict, particularly from iron and steel production factories used to make weapons and armaments that rely on fossil fuels to run properly.

Finally, China’s actions in the South China Sea are also worsening climate change’s regional impact. While not only attributable to China, Chinese naval actions in the South China Seas have exacerbated pollution and overfishing, and have destroyed coral reefs. To make matters worse, a UN tribunal found that China was fully aware of how its actions would degrade the region’s environment, but proceeded to pursue its military and economic policies anyway.

Considering that water continues to drive conflict, the United Nations should declare water a global public good. In 2011, the UN declared access to water to be a basic human right, yet many conflicts still stem from water scarcity and use, as discussed previously. However, many countries still allow water access to be privatized, when it needs to be a public good if we are to stop water-based conflicts. In order to stop water-based conflicts and in consideration of the fact that water is necessary for human life and the health of all global ecosystems, it should be considered a common good.

If water is not made into an international common good, the next best thing would be improving policies intended to manage water resources, agriculture, and governance. We also need better protection for water systems so that they cannot be weaponized in a conflict. All of these policies will require significant funding so that water can be protected properly, but it will be worth it in terms of human lives saved.

Ellie Shackleton is the Program Assistant at the Center for the National Interest. She has contributed to two previous policy reports on climate change, Beyond UN75 and Building Back Together and Greener. Find her on LinkedIn here.