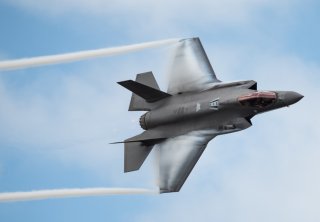 The letter, signed by eighty-nine members of Congress, calls for a larger F-35 investment in the upcoming 2023 budget submission sufficient to reach the addition of as many as one hundred new F-35s per year.

The initiative, led by Reps. Marc Veasey (D-TX) and Mike Turner (R-OH), cites the technological superiority of the airplane, the global threat environment, allied cooperation, and impact upon the U.S. economy.

The bipartisan letter refers to the kinds of stealth aircraft and advanced weapons adversaries of the United States are fast-tracking to production.

“Our adversaries continue to advance surface-to-air missile systems and develop their own stealth fighters at an astonishing pace. Meanwhile, the average age of the U.S. Air Force fighter fleet is approaching 30 years and the cost to operate and support these legacy aircraft continues to rise,” the letter states.

Part of the equation has to do simply with numbers: Russia is working quickly to increase its number of Su-57 fighters and China is not only producing more J-20s but fast-tracking new variants of its fifth-Generation J-31. These circumstances arguably generate a need for greater numbers of F-35s.

As of 2021, China has only built 150 J-20 stealth fighters, whereas the U.S. Air Force already has more than 280 F-35As and plans to acquire 1,763. This is the Air Force alone, meaning the number does not include the growing number of F-35Bs traveling on amphibious assault vehicles with the U.S. Marine Corps or the now arriving carrier-launched F-35C Navy aircraft. Overall, current force plans call for 353 F-35Bs and 67 F-35Cs for the Marine Corps, and 273 F-35Cs for the Navy.

There is now a call to go above these planned numbers of F-35s, according to the Congressional proponents for the aircraft, who cite the growing age of a U.S. Air Force and Navy fighter fleet mostly emerging from the 1980s.

“It is disappointing that year after year DoD (Department of Defense) continues to flat-line F-35 production investments, defer needed readiness funding, and underfund advanced capabilities for this critical fleet,” the letter states.

The advocates for more F-35 funding also cite the continued impact of the F-35 upon the U.S. economy and industrial base.

“Across our country, more than 1,800 suppliers contribute to the F-35, with one in every two of those companies being a small and/or disadvantaged business. The F-35 supports more than 254,000 high-tech, high-paying American jobs annually with thousands of those workers who are skilled union members,” the letter states.