Congress: The F-35 Consortium is Key to International Security 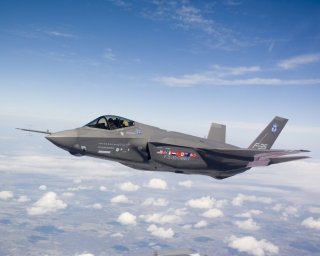 Switzerland, Japan, Israel, and South Korea are among the group of nations who have, in recent years, joined the international community of Lockheed Martin F-35 Lightning II nations. This has provided some of the inspirational basis upon which eighty-nine members of congress, both Democrat and Republican, sent a letter to President Biden asking for more F-35 funding in 2023.

“Now is the time to make the investments in America and uphold our commitments to our allies to buy a minimum of 100 F-35s for our U.S. services per year, invest in the advanced capabilities to stay ahead of the threats, and fund the sustainment profile necessary to support these aircraft for decades to come,” the letter, sponsored by Rep. Marc Veasey (R-Texas), states.

The Congressional call for more U.S. production and acquisition of the F-35 rests upon a host of variables to include concern over Russian and Chinese threats, continued support for massive numbers of U.S. jobs and small-business contributions, and the overall “age” of Air Force and Navy fighters.

Alongside these factors, there is another compelling reason why members of Congress are teaming up to call for higher levels of F-35 funding in 2023, and that is the growing international community of F-35 allied nations. The number of countries now adding F-35s is growing extremely quickly in terms of planned fleet size and arriving aircraft. Overall, at least thirteen countries operate or plan to operate F-35s. South Korea operates sixteen F-35s so far and Denmark and Norway are receiving and operating their F-35s. Many other countries are at various stages of acquiring healthy numbers of the jet, including Switzerland, Japan, Israel, Poland, Australia, Italy, the Netherlands, Belgium, Singapore, and the United Kingdom. Japan, for instance, plans to acquire roughly 200 F-35s to include a mix of F-35As and F-35Bs and the UK already owns 21 F-35s with plans to acquire more.

International collaboration and F-35-driven allied cooperation continue to bring tactical and strategic advantages for the United States, something Veasey also emphasized in his letter. Veasey mentions the well-known event this past summer wherein the British HMS Queen Elizabeth sailed into the South China Sea armed with both British and American F-35Bs.

“The HMS Queen Elizabeth is sending a strong message to China that we still have the most modern capabilities in the world, and that we will work together to deter aggression and keep the Indo-Pacific region free and open. The F-35 is the lynchpin, bringing together fourteen allied and partner nations, providing unmatched interoperability and enabling regional deterrence and diplomacy,” the letter states.

Simply increasing the number of different kinds of fighter jets and airplanes for U.S. allied nations strengthens NATO and America’s global security posture overall, but there are specific ways in which growing F-35 partnerships can bring unprecedented value. All F-35s across the growing consortium of F-35 nations are all engineered with something called MADL, for Multifunction Advanced Datalink. This is a secure and highly specialized datalink unique to F-35s, meaning multiple countries operating the aircraft can quickly network voice, video data, and other time-sensitive intelligence information to one another during ongoing warfare. In many cases, the protocols, frequencies, or technical standards used by fighter aircraft and drones from different countries are constricted by narrowly configured technical standards unable to interoperate with allied platforms. The F-35 was built with a specific mind to address and resolve this challenge, something which allows allied forces to expand the operational envelope and disperse F-35 formations across wider areas while retaining secure networking.

For instance, should a conflict unfold in the Pacific, having U.S. Japanese, South Korean, and Australian F-35s integrated with each other and able to coordinate will certainly change the paradigm in terms of any kind of attack strategy or unfolding war scenario. Amphibious assault ships armed with F-35Bs could, for example, support a Japanese amphibious assault on mainland China by extending an attack formation through MADL networking between each country's F-35s

There are even many gateway technologies now in development—for example, Northrop Grumman’s Freedom 550 radio—which convert frequency signals to enable F-35 interoperability with F-22 Raptor fighter jets without compromising stealth. There is also two-way connectivity with LINK 16 between F-35s and F-22s, and other transport-layer mechanisms through which the F-35 can network with fourth-generation fighters or even bombers, drones, or ground vehicles.