Congress Must Fix the Electoral Count Act to Avert a Crisis 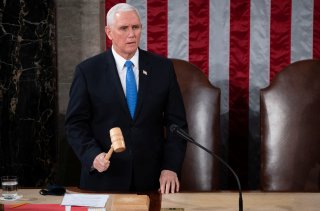 With the experience of the Trump administration in mind, Congress must use its lame-duck session to make the electoral reforms needed to ensure the continuation of free and fair elections, one of the pillars of the American republic. After the “stolen election” of 1876, Congress passed the Electoral Count Act of 1887 to govern the limited role the Constitution gave to Congress in the counting of electoral votes from the various states. Although wider electoral reforms—for example, expanding the House of Representatives, moving to multi-member congressional districts, reducing uncompetitive gerrymandering, instituting ranked-choice voting, and eliminating state-run primaries—are needed to address the problem of political extremism in America, such reforms are improbable given current partisan gridlock. At a minimum, however, Congress needs to urgently amend or replace the poorly written and ambiguous Electoral Count Act.

Several dangerous points of potential electoral failure, which were demonstrated by the abuse of the act after the 2020 presidential election, have not yet been addressed. The first is that, alarmingly, there has been talk in some states about giving legislatures the power to overturn the will of the people after an election if they disapprove of how the people voted. Elections are patently unfair if the rules are arbitrarily changed during the middle of an election cycle. Thus, two reform bills—one passed by the House and one currently before the Senate—both stipulate that state officials must count their votes using the election laws in place on election day. This issue should not be confused with the independent state legislature theory currently being tested before the Supreme Court, which argues that state courts cannot overrule those legislatures on election law, even if those legislative bodies have violated a state’s constitution. Of course, if the Supreme Court rules in favor of the state legislatures in this case, it could raise questions about the constitutionality of the Supreme Court’s power of judicial review over some or all laws passed by Congress, which the Court assumed in 1803 without the constitutional text to support it.

A second danger is that objecting to states’ electoral votes has been too easy. Congress is required to consider any objection from one senator and one representative. After the 2020 election, some senators purposefully introduced trivial objections to throw sand in the gears of the electoral counting process. To remedy this problem, the Senate and House bills both require at least 20 percent of both houses of Congress to support an objection before it can be considered.

Both bills also strictly limit the grounds on which an objection can be lodged. The Constitution already limits Congress’ role in the process. Thus, that legislative body should not be allowed to question the validity of state elections after the states have certified their electors and sent them to Washington—which was what President Donald Trump unconstitutionally asked of Vice President Mike Pence when he acted in his constitutional role as presiding officer of Congress on January 6, 2021.

Finally, the bills reinforce the notion that the vice president’s role in the process is merely ceremonial. Acting in his or her presiding role in Congress, the vice president doesn’t have the power to toss out states’ electoral votes or accept different slates than those certified as valid by the states. In 2020, Trump was scheming to have Pence do just that to ultimately override American voters’ preferences and throw the election to him.

Fortunately, after the debacle on January 6, 2021—in which, for the first time in American history, a defeated president had tried to subvert the peaceful transfer of power—there appears to be enough bipartisan support in the Senate to pass an Electoral Count Act reform bill. That needs to happen soon. A conference committee needs to resolve the manageable differences between the two Houses, and President Joe Biden needs to sign it before the current Congress goes out of session in early January. These reforms will be the most important legislation passed during the 117th Congress.