Congress to Navy: You Can’t Retire Those Ships Just Yet 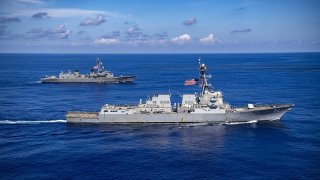 Congress is considering implementing measures that would make it more difficult for the U.S. Navy to retire many of its aging surface ships.

The provision, first reported by Defense News, puts the onus on the secretary to explicitly consider every possible option short of retirement and to assert that the proposed retirement will in no way affect the overall defense strategy or the obligations of individual commanders.

The Navy seeks to retire seven Ticonderoga-class of guided-missile cruisers and four littoral combat ships (LCS) in the fiscal year 2022. The former includes Anzio, Port Royal, Hué City, San Jacinto, Vella Gulf, Lake Champlain, and Monterey; the latter, Freedom, Detroit, Little Rock, and Fort Worth. The Navy has expressed concerns that the aging Ticonderoga-class cruisers are becoming increasingly more difficult to repair, maintain, and refit. The service is engaged in a wide-ranging life extension program for its 22-strong Ticonderoga fleet, but those efforts are being stymied by rampant cost overruns and work availability delays. “The cruisers right now in the modernization are running 175 percent to 200 percent estimated cost, hundreds of days delayed,” Chief of Naval Operations Adm. Mike Gilday told lawmakers at an earlier hearing. The Ticonderoga class will eventually be replaced by the next-generation Large Surface Combatant DDG(X) destroyer, but that program is not expected to enter into an active acquisition stage until at least 2028.

The Navy has been pushing for months to decommission the first batch of LCS vessels, which it described as test ships. That characterization has been disputed by key lawmakers on the House Armed Services Committee (HASC). “I’m not buying it because we need to look at what’s Battle Force 2025, we need to look at what we have today and how we can use it and how we can use it most efficiently,” said HASC vice-chair Elaine Luria (D-Va). “The idea of divesting of current platforms that still have a usable service life in order to invest in something that we might develop the technology for in the future—paired with our poor track record on [developing new] platforms—just makes absolutely no sense to me.” The lead Freedom-class ship, USS Freedom, is slated to be decommissioned later this month.

Facing tight budgets and other structural spending constraints, the Navy has sought to retire swathes of its aging inventory to free up resources for modern projects, including hypersonic strike weapons and the DDG(X) program. The service’s “divest to invest '' growth strategy has been met with stiff resistance by some lawmakers, who have argued that the Navy’s downsizing efforts would deal a significant short-term blow to U.S. Navy capabilities at a time of growing Chinese military assertiveness in the Pacific.