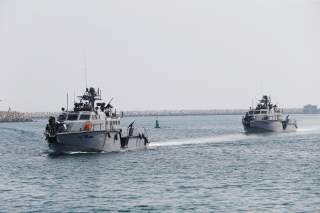 Two trends are riling up members of Congress about the Pentagon’s budget this year: a president who continues to rob the Pentagon piggy bank for border wall money and a decline in Navy shipbuilding. Red faces, heated exchanges, and alarm bells have followed.

Lawmakers are grilling leaders in particular over the Navy’s increasingly aspirational goal of having a 355-ship fleet by 2030. Two years ago, Congress codified this fleet size as law. But there’s simply not enough money to deliver on the promise.

Absent enough dollars to achieve the goal, officials are busy trying to thread needles. In December, it was reported that the White House budget office directed the Navy to devise a plan “to achieve a 355-ship combined fleet, including manned and unmanned ships, by 2030.”

If only it were that easy. Including unmanned ships in the Navy’s fleet size would require a change to the service’s ship counting methods.

Congress is unlikely to approve. Grey hulls are a visible sign of America’s combat power, projecting strength forward on the high seas and providing floating bases of U.S. sovereign territory around the world to accomplish missions.

Naval shipbuilding is also tied to a slew of congressional interests—including a healthy and growing manufacturing industrial base, promoting highly-skilled shipyard workers, protecting local jobs, and demonstrating a commitment to national security.

The Navy is trapped between an inflexible Congress, constrained budgets, growing challenges to America’s sea power, and outdated methods of measuring naval strength.

The Navy’s budget request for fiscal year 2021 does little to address these countervailing forces. Shipbuilding is cut by $4.1 billion from 2020 enacted levels, and the service is asking for fewer ships than it requested just a year ago.

Representative Joe Courtney (D-CT) rightly reiterated that “projecting out over the next five years, it is a cut from the Obama projection in terms of fleet size, and also keeps us further away from trying to get to the goal of the 355-ship Navy.”

To an extent, these challenges should be expected. While the Navy has defended its plans to expand the fleet since 2016, it has not received enough cold hard cash to grow at such an ambitious pace. Now, with the purchase of the first Columbia-class nuclear submarine eating into shipbuilding funds, the task borders the impossible.

Lawmakers are balking, tellingly asking a spate of leading questions during recent budget hearings about which services should be fronting the Navy’s bills – including the Columbia purchase and a recapitalization of the old sealift fleet. Despite funding shortfalls, Acting Secretary of the Navy Thomas Modly recently said that the Navy should really be planning for a 390-ship fleet, based on its unreleased Integrated Force Structure Assessment. Sec. Modly then went farther, saying, "the number is like 435 with unmanned in there."

Secretary of Defense Mark Esper has been delaying the release of the Navy’s congressionally mandated 30-year shipbuilding plan until he has a chance to measure the force structure assessment against several other internal reports. This was a decision he suffered for last week in Congress.

Dr. Esper also voiced support for a larger Navy during his appearance before the House Armed Services Committee (HASC), saying, "I'm a big believer in attack submarines…my gut tells me we need more than what we've planned for." Esper also raised the specter of inheriting a “hollow Navy” as part of the difficulty in growing the fleet more quickly.

Though Esper promised HASC Chairman Adam Smith an update on the Navy’s long-term shipbuilding plans this summer, he also reiterated the steeper challenges facing the department. Any plan must be compatible with “future warfighting doctrine, threat developments, and budget constraints.”

The defense secretary reminded Congress he is also contending with “a topline budget which actually gives us two percent less buying power.”

As if this weren’t enough, the Navy’s current ship counting method is an inflexible bureaucratic mandate designed to lock parties into specific force makeups. It gives insufficient weight to cost, technological developments, or future operational needs.

In 1981, the Reagan administration set out to build the United States military back up from its post-Vietnam nadir. Reagan’s Secretary of the Navy John Lehman assumed an aging fleet, exacerbated by the Carter administration’s application of a Ship Operating Forces counting methodology that expansively included “all active, reserve, and civilian-manned ships owned by the Navy.”

This Reagan-era method has been used ever since, with one pause in 2014-2015 that demonstrated the challenges of adjusting counting methods. It's a cautionary tale the Pentagon should learn from, especially given Esper's previous comments, which suggest that he's hoping for a similar update to the rules.

Last month, Sec. Esper said he wants to tease out what the future fleet looks like. He thinks “one of the ways you get there quickly is moving toward lightly manned [ships], which over time can be unmanned.” While practical, this particular solution is unlikely to satisfy Congress.

In 2014, then-Secretary of the Navy Ray Mabus attempted to update ship counting to reflect the types of demands placed on the fleet. He proposed a new methodology to include “ship types routinely requested by the Combatant Commanders,” such as small coastal patrol vessels and hospital ships.

Congress did not agree. Members accused the Navy of artificially inflating fleet size. It quickly reestablished the battle force ship counting method into law in 2015.

As the Pentagon considers a change to ship counting and a larger fleet overall, the objective of this goal bears reexamination.

Reports from the U.S. Naval War College and the U.S. Naval Institute predict that the Chinese fleet might be twice as large as the U.S. fleet by the 2030s, impacting the balance of power in the South China Sea, and potentially throughout East Asian waters.

Chinese shipbuilding has outpaced the U.S. Navy’s for years, with no signs of slowing. There is little time to waste over debates about counting methods at the cost of real strength. Though the U.S. retains a more capable fleet than the PLAN, size still matters.

The U.S. Navy projects force via its presence around the world. In order to build up in the Pacific, the Navy must draw down ships elsewhere, ultimately sacrificing its current position. Fundamentally, the mission of the Navy remains intrinsically tied to its size.

On the surface, unmanned vessels are an appealing solution. Mark Cancian at the Center for Strategic and International Studies has reinforced that unmanned and undersea vessels could have “revolutionary long-term force structure implications.” However, as the Navy continues to rapidly build and deploy increasing numbers of unmanned vessels, senior leadership has struggled to tangibly account for the investment.

Unmanned platforms are central to the Navy’s plans for Distributed Maritime Operations, featuring a large number of smaller, networked ships, capable of covering larger areas at lower cost. Despite these considerations, Chief of Naval Operations Adm. Michael Gilday and Acting Secretary Modly consistently reiterate that unmanned ships will not count towards the 355 goal.

The practicality of this decision—in light of constrained budgets, evolving operational concepts, and a legal obligation to reach 355 ships—requires a harder look from both Congress and the Pentagon.

Reasonable minds continue to disagree about the composition of the U.S. Navy. Few would debate its purpose and mission. Though a 355-ship fleet is an easy signpost, it tempts policymakers to place too much weight on numbers alone. This can cause one to lose sight of the Navy’s broader objective to help uphold a balance of power in the Pacific, and how that objective might be achieved.

As Chairman Smith said last Thursday, "you can have 355 rowboats theoretically, and you'd have 355 ships, so I don't even know why we put that number out there. I would much rather see 'here are the capabilities that we need to have.’” It’s an important point. The Navy has some serious homework to do and no time to lose.

Mackenzie Eaglen is a resident fellow at the American Enterprise Institute (AEI), where she works on defense strategy, defense budgets, and military readiness. She is also a regular guest lecturer at universities, a member of the board of advisers of the Alexander Hamilton Society, and a member of the steering committee of the Leadership Council for Women in National Security.

Her article first appeared at RealClearDefense on March 10.