Continuous Upgrades: Can the Navy's Ford-Class Carriers Stay Ahead of the Curve? 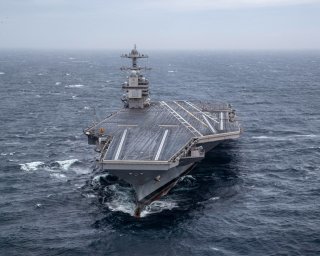 What was once an ambitious plan to architect a new fleet of U.S. Navy aircraft carriers able to propel U.S. maritime dominance into the twenty-first century is now a reality: the first Ford-class carrier will go to sea later this year. Intended to replace the retiring Nimitz-class carriers on a one-for-one basis for the rest of this century and beyond, the Ford-class carriers have been taking shape through a series of milestones and breakthroughs.

“As the Ford is integrated into fleet operations over the summer. We'll continue to roll all these lessons learned into the follow-on ships. John F Kennedy's about 85% complete on track to deliver in 2024. The Enterprise is 15-percent complete and the shipyard is building several keel units. This Spring those units will be set in drydock,” Capt. Brian Metcalf, program manager for Ford-class Aircraft Carriers, told an audience at the 2022 Sea Air Space Symposium.

While the essential structure and framework of the Ford-class will remain consistent as successive ships emerge, the carriers are built with the technical infrastructure to accommodate ongoing upgrades. For example, the USS Kennedy will be built to operate the first of its kind Navy F-35C fifth-generation stealth fighter. Deploying the F-35C will mark the first time a stealth aircraft will deploy on an aircraft carrier.

The ships will also receive upgraded radar systems tailored to address the threat envelope specific to aircraft carriers. The Kennedy, for instance, will receive the Enterprise Air and Surveillance Radar (EASR) system which introduces a new level of detection sensitivity and layered defenses for the carriers. The Ford’s massive increase in on-board electrical power will not only sustain electrical systems such as computing, command and control and sensors but also lay the technological foundation for the integration of new generations of advanced weapons systems such as lasers and electronic warfare applications.

The shipbuilding process itself has continuously been revamped and upgraded by the Navy and its HII shipbuilding partner in Newport News, Virginia. In order to increase efficiency and eliminate some of the hurdles, roadblocks, and challenges associated with the Ford’s construction, HII and the Navy shifted shipbuilding methods to a modular approach wherein larger portions of the ship were built on deck, prior to being integrated into the hull or larger structure. This saves time, increases efficiency and expedites the integration of functional components. HII has learned from the Ford’s construction and is set to bring those lessons to the Kennedy, building the next Ford-class carrier in a more cost-efficient and effective way. The Enterprise is now being approached the same way as the Kennedy is, although there are likely continued modifications as builders and engineers learn new lessons and continue to modify their techniques.

Moreover, the Navy’s Integrated Digital Shipbuilding (IDS) method, which is computerizing key elements of the shipbuilding process, will take these enhancements further and while also making the process easier.

“IDS is a transformational change in how we build ships. It takes all of the paper drawings and construction instructions for the workforce, and puts them on portable laptops and iPads. This automates the planning and progression for all forming assignments. The tools for doing your work are literally at the fingertips through hyperlinks, and the workforce has seen improved and increased efficiency,” Metcalf explained.

The program has not been without its struggles. Over the last decade, many members of Congress have raised questions about cost-overruns, delays, and complications with the development of the USS Ford. However, during the early phases of the Ford’s development, Navy program managers talked about the non-recurring developmental costs associated with a first-in-class ship such as the Ford. However, future Ford-class ships will be able to benefit from these innovations and benefit from both improved technology and lower costs.