Copycat: Is China Building Its Own Ford-Class Aircraft Carrier? 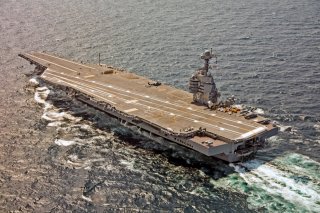 China is making rapid progress with the construction of its third aircraft carrier as part of an effort to massively increase its ability to project power and advance its goal of becoming a dominant maritime power on the global stage.

The People’s Liberation Army Navy’s first indigenous carrier, the Shandong, is the country’s second carrier. It is already performing dual-carrier operations and participating in deployments near the South China Sea. China’s domestically-built carrier features a larger flat air deck that is quite similar to that of the U.S. Navy’s Ford-class.

China’s government-backed Global Times newspaper reports that China’s third carrier, called the Song Zhongping, will launch as soon as this year. The launch of this third carrier is integral to China’s stated expansionist goals. The Global Times quotes a Chinese military expert as saying that "we need to sail to more unfamiliar waters, face more complicated weather and sea conditions in more complex missions, and have more accompanying forces."

China’s new, indigenously-built carrier appears to resemble the U.S. Navy’s Ford-class carriers, as they abandon China’s traditional “ski jump” configuration in favor of a larger, flatter deck that resembles the Ford-class. Beyond that, there is another substantial way in which the emerging third Chinese carrier appears to mirror the Ford-class. The Global Times report says that “commercial satellite images indicate that it is different from the previous two carriers and uses electromagnetic catapults.”

Does the new Chinese carrier copy the U.S. Navy’s breakthrough Electromagnetic Aircraft Launch System (EMALS)? That may be the case. Although technological specifics of the EMALS system are likely not available, it is conceivable that China attempted to replicate or even steal American innovations in the realm of carrier propulsion.

China is known for having a large domestic shipbuilding infrastructure, and Beijing is moving aggressively to increase ship construction in a clear effort to meet if not eventually overmatch the United States. The president of the Aircraft Carrier Industrial Base Coalition (ACIBC), Rick Gianni, told the National Interest that China’s shipyards are four times larger than U.S. shipyards, which may enable rapid, large-scale ship production. China is quickly adding new destroyers, amphibious assault ships, and carriers, a development that has prompted the U.S. Navy to consider shipbuilding expansions and efforts to pursue a larger fleet. The Chinese Navy is already numerically larger than the U.S. Navy, although that by no means suggests it is superior in terms of maritime warfare technology. Moreover, while China may be quickly building carriers in an effort to match the U.S. Navy’s power projection capability, it has a long way to go before it can rival America’s fleet of at least eleven aircraft carriers.

But the third carrier features a number of new technologies, so it might take longer. For example, commercial satellite images indicate that it is different from the previous two carriers and uses electromagnetic catapults, he said.