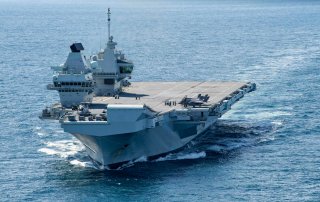 In a ceremony at Buckingham Palace last month Queen Elizabeth II, the 93-year old ruling monarch of Great Britain, met with the incoming and outgoing Commanding Officers of the Royal Navy's newest (and only current) aircraft carrier HMS Queen Elizabeth.

The meeting was the Queen's final official duty prior to her retiring to Windsor Castle due to the COVID-19 pandemic in the UK.

Captain Angus Essenhigh became the ship's fourth commanding officer, who took over for Commodore Stephen Moorhouse, who has been promoted to Commander of the UK Carrier Strike Group. Moorhouse had overseen the training of the warship's crew and RAF pilots last autumn. Essenhigh is actually the new carrier's third captain in just the last ten months, and has been overseeing recent trials involving the use of stealth aircraft for the first time in British waters. Despite having had four commanders in such a short period, the ship is only now preparing to depart from Portsmouth in the south of England for a scheduled training cruise around the UK with a 600-strong crew.

HMS Queen Elizabeth, along with her still under construction sister ship HMS Prince of Wales, has been seen as an opportunity for greater cooperation among the European NATO partners – and the carriers have been described as "hubs for a European carrier strike group (CSG)" that could transform NATO's naval capabilities. The new carriers mark a major turning point for the Royal Navy, which for two centuries had been among the world's most potent fighting forces and at its peak had some 332 warships. Today it has approximately 30 vessels fit for service.

Since the decommissioning of HMS Ark Royal in 2011, the Royal Navy is again operating a carrier and its largest ever. This new class of warship is far more automated and advanced, and is capable of deploying thirty-six of the new F-35B Lighting II Joint Strike Fighters.

Yet, despite all these advanced capabilities there remains serious concern that the ship's crew could become infected from the highly infectious coronavirus. The Royal Navy has stated that it is taking "sensible" precautions to safeguard the welfare of its sailors. Former Defence Minister Kevan Jones told reporters that the 65,000-ton flagship of the Senior Service would not sail without all of her 700-strong crew being tested for COVID-19.

A spokesperson for the Royal Navy added: "HMS Queen Elizabeth has a key role to play in the defence of the United Kingdom. We continue to conduct sensible and proportionate planning to ensure the welfare of our personnel is protected, while maintaining essential operational duties."

Last week France's only aircraft carrier, Charles de Gaulle, was forced to return to the port of Toulon after members of its crew tested positive for the coronavirus. As of last Friday, 668 sailors had COVID-19 on the French warship. On the other side of the world, 950 sailors had tested positive for the disease aboard the USS Theodore Roosevelt (CVN-71), which remains in port at Naval Base Guam.