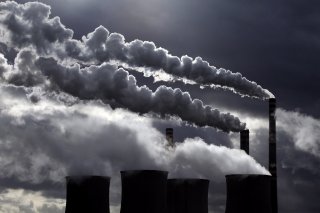 Amid lockdowns all across the country, the U.S. is expected to register the sharpest drops in climate-damaging emissions on record, according to data from the Energy Department.

For the year 2020, the agency’s Energy Information Administration (EIA) is projecting a 7.5 percent fall in fossil fuel emissions, which would be the biggest decline in energy emissions in the U.S. since at least 1990, according to EIA’s data.

The year directly following the start of the 2008 recession witnessed a 7.3 percent drop.

Despite the Trump administration’s efforts to roll back tougher mileage and emissions standards, overall emissions will see a steep reduction because of the mostly paralyzed economy and constraints on business and travel related to the COVID-19 pandemic.

When a suppressed economy returns to growth, the rate of burning of fossil fuels typically rebounds, according to EIA.

EIA’s report added that solar and wind power will account for the majority of the nation’s new electricity generation. This year, power plants are slated to use 11 percent more renewables and 20 percent less coal.

The U.S. will also return to being a net importer of petroleum for least a time, which is largely driven by the COVID-19 pandemic, slowdowns in domestic drilling and the growing petroleum supply glut caused by continuous pumping by Saudi Arabia and Russia.

Emissions have fallen drastically in China as well. According to China’s Ministry of Ecology and Environment, the average number of “good quality air days” in Hubei Province increased by 21.5 percent in February, compared to the same period the year prior.

As the planet’s biggest polluter, China contributes about 30 percent of the world’s CO2 emissions on an annual basis, but the pandemic has mostly cleared out visible clouds of toxic gases that are often seen hanging over industrial cities. Coal-fired power stations in China saw a 36 percent drop in consumption from Feb. 3 to March 1, compared to the same period last year, according to WIND data service statistics.