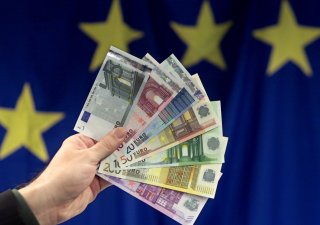 In 2012, in the midst of an Italian sovereign debt crisis, Mario Draghi saved the Euro by famously saying that the European Central Bank (ECB) would do whatever it took to keep the Euro intact.

Today, with Italy at the epicenter of the world coronavirus epidemic, it would seem to be only a matter of time before the durability of the Euro is again tested by another full-blown Italian sovereign debt crisis. For the sake of both the Italian and the global economy, one must hope that Europe has the political will this time around to do whatever it takes to save the Euro despite the likely very high financial cost of so doing.

Among the reasons for thinking that Italy is all too vulnerable to another round of its sovereign debt crisis is that even before the coronavirus epidemic struck its economy was weak while its public finances and banking system were in a state of poor health.

After having experienced virtually no economic growth over the past decade, the Italian economy again entered into a recession by end-2019. At the same time, at 135 percent its public debt to GDP ratio was higher than it was in 2012 while its banks’ balance sheets remained clogged with non-performing loans and Italian government bonds.

There can be no doubt that the coronavirus epidemic will seriously damage both Italy’s public finances and its banking system. It will do so by throwing the country into its deepest economic recession in the post-war period. That in turn is bound to cause Italy’s budget deficit to balloon and its banking system’s non-performing loans to skyrocket as more of its households and companies file for bankruptcy.

Being at the epicenter of the coronavirus epidemic, Italy’s economy is likely to be amongst the hardest hit in Europe. Not only has the entire country been forced to lock down for an extended period. Its tourist sector, which accounts for around 7 percent of its economy, has literally been decimated. Meanwhile stuck within a Euro straitjacket, there is little meaningful monetary policy or fiscal policy action that it can take. This makes it all too likely that the Italian economy will shrink by at least 10 percent in 2020, which is bound to raise questions anew about the sustainability of its public finances and the health of its banking system.

In 2012, Mario Draghi’s “whatever it takes” statement saved the Euro without the ECB having had to advance Italy any money as markets took Mr. Draghi’s statement at face value. In today’s context of very unsettled international financial markets and the prospective considerable worsening in Italy’s economic and financial position, it is highly unlikely that an ECB “whatever it takes” statement will be believed by markets without being tested. This might require Italy’s European partners to actually put up very large amounts of money to show their commitment to keeping Italy in the Euro.

One way to gauge the amount of public money that might be needed to prop up Italy is to consider that over the past decade it took around US$300 billion in official support to keep Greece in the Euro. Given that the Italian economy is around ten times the size of that of Greece, this would suggest that Italy might very well need around $ 3 trillion in official support to keep Italy in the Euro.

Considering that the Italian government has around US$400 billion in public debt maturing each year and that in a deep recession its budget deficit could balloon to well over US$200 billion, over a two-period the Italian government could need US$1.2 trillion to keep itself afloat. Meanwhile, Italy’s US$4 trillion banking system could very well need at least US$1 trillion in official support to counter the capital flight and the spike in non-performing loans that are all too likely to occur in the event of a deep Italian recession.

In the past, Germany, the Eurozone’s taskmaster, has been reluctant to pony up anything like the sums of money that Italy is likely to need soon. Hopefully, Germany together with Italy’s other Northern European partners will prove to be a lot more forthcoming in financial support for Italy than they have been to date. If not, the world economy should brace itself for a disruptive Italian exit from the Euro.