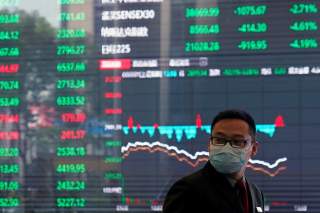 Key point: Foreigners were strategically short-sighted in relying on an inherently unstable and belligerent regime in China for the supply of goods, yet any reliance can be problematic at times

This looks like the end of China’s central role in global supply chains. A microbe in China—and the response of a totalitarian government—is killing it.

Americans are angry. “I was on the phone with leaders from several hospitals in New York, and they told me that they had contracts with Chinese companies where they were waiting on things like plastic gloves, masks, all of this stuff where they were on the ships on their way to the U.S., and the Chinese government said ‘no, no, no, no, turn around, we need this stuff,’ ” said Maria Bartiromo on her Fox Business Network show “Mornings with Maria,” on the 19th of this month. “How is anybody going to trust China in terms of keeping up their end of the bargain again in business?”

The influential television anchor is voicing a concern heard throughout America these days. Peter Navarro, who appeared on her Fox News Channel show on the 23rd, provided more reasons for cutting links with Chinese suppliers. “China put export restrictions on those masks and then nationalized an American factory that produces them there,” said President Donald Trump’s director of trade and manufacturing policy, referring to N95 masks, used for protection against the COVID-19 coronavirus.

The coronavirus has exposed a critical vulnerability. Americans at the moment are short of N95s. And that is not the only type of mask they need. Factories in China cannot open for, among other reasons, lack of industrial masks, so Beijing has taken steps to keep these Chinese-produced items in country. “Industrial safety masks have been banned from export from China,” Jonathan Bass, the owner of Los Angeles-based PTM Images, told me last week.

“China has shown us that they will ban the export of masks for the protection of their own people over the protection of all people,” Bass said. “This shows us that America is extremely vulnerable to China’s whim of cutting exports for health-and-safety-related products. What’s next? Pharmaceuticals to save lives? Rare earth metals? Shoes?”

Whatever the goods, the disruption in supply will last longer than most analysts think. Giant container ships are skipping Chinese ports or are leaving only 10 percent full. At the port of Long Beach, Bass tells me, container traffic is down about 40 percent. That’s the result of closed Chinese factories.

Chinese factories were scheduled to reopen February 9, 10 days after the end of the Lunar New Year holiday. Yet as Simina Mistreanu, who writes for Forbes on the Chinese manufacturing sector, notes, many plants remain closed.

She cites the situation around Chengdu, where authorities require factories to provide two masks daily for each worker. In order to start production, a plant must show it has a two-week inventory of masks. Masks are unavailable, so in one cluster outside the city only five of about 50 companies have gone back to work.

It appears the one general exception to the slow-start are state defense industries.

Even if factories could operate at full blast, logistics businesses are not. Warehouses are shut, making shipments extremely difficult. Moreover, as Bass points out, containers are now left sitting on the dock at the Tianjin and Ningbo ports for extended periods. Containers bound for the U.S. are being loaded as much as four weeks late.

Some believe shortages will become noticeable at American retailers in mid-April, but the big-box stores are especially vulnerable because they generally keep inventories to a minimum. So Walmart shelves, a friend tells me, might show empty spots next month.

And try to buy an iPhone this spring. On the 17th of this month, Apple announced it expected to miss its revenue forecast for the current quarter, in part due to shortages of that iconic product.

The Chinese slowdown is far more serious than many believe. Analysts, looking back to the SARS epidemic in 2002-03, are predicting a “V”—quick—recovery.

This time, the recovery could resemble an “L,” in part because the disruption is so much greater than it was back then. Even the best-run companies this time are being taken by surprise. Apple, given its dependence on the Chinese market, has its pulse on China, but the company issued its overoptimistic guidance on January 28, less than three weeks before the revenue-miss announcement on the 17th. That’s an indication of the fast erosion in China’s economy.

And this brings us back to America’s dependence on China for critical products. More important than phones, China’s troubles look like they will result in shortages of 150 prescription pharmaceuticals, some of which have “no alternatives.” Yet Beijing last week said it wanted to become an even more important part of the world’s healthcare supply chains. The epidemic, however, tells us we must move in the opposite direction. After all, why should anyone want to become even more vulnerable to an unreliable supplier?

Foreigners were strategically short-sighted in relying on an inherently unstable and belligerent regime in China for the supply of goods, yet any reliance can be problematic at times. “In crises like this, we have no allies,” Navarro told Bartiromo on Sunday. “Back in 2009 during the swine flu problem, our best friends in Australia, Great Britain, and Canada basically denied us what we needed. Australia refused to send 35 million doses of vaccine.”

As Navarro said, the administration is now working “Trump-time” to solve supply-chain issues. President Trump has been thinking about these matters for a long time. On July 21, 2017, he issued his Executive Order on Assessing and Strengthening the Manufacturing and Defense Industrial Base and Supply China Resiliency of the United States.

The Defense Industrial Base study, as it is known, helped pushed the administration in 2018 to impose tariffs on steel and aluminum pursuant to Section 232 of the Trade Expansion Act of 1962 to preserve the U.S. industrial base. These much-criticized tariffs were a good move, first and foremost a national security measure.

So in a sense were the tariffs Trump imposed on China under Section 301 of the Trade Act of 1974. These tariffs, by creating uncertainty as to the future of U.S.-China trade ties, encouraged companies to move portions of their supply chain out of that troubled country.

Of course, companies were able to provide goods at low cost when they established factories in China, but now the world better appreciates the cost of low-cost goods. Moving toward self-sufficiency will make products more expensive, but at least they will be available.

Walmart, which essentially forces suppliers to manufacture in China, told consumers to “save money, live better.” Yet how can they live better if store shelves are bare?

Gordon G. Chang is the author of The Coming Collapse of China.  Follow him on Twitter @GordonGChang. This first appeared last month.