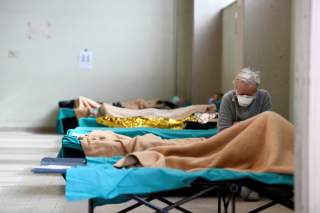 As the coronavirus spreads across the US, one sensible piece of advice offered by the Centers for Disease Control and Prevention is for individuals suspected of carrying the virus to self-quarantine and, in particular, to stay away from work. However, for many workers, this is not an option. Either because they work in service sector industries where remote work is not a possibility, such as home health aides or personal caregivers, or, more importantly, their work does not allow them to take sick days or paid medical leave. A change in policy could be a simple and cost-effective way to stem the spread of this virus and other illnesses.

The United States is one of the few nations without a federal paid sick leave policy, although several states have begun expanding coverage and private employers often offer paid sick leave as a benefit. However, there are disparities in access across workers, especially for low-income workers. According to data from the Bureau of Labor Statistics, 71 percent of private industry employees had access to paid sick leave in the United States in 2018, but only 31 percent of those in the bottom 10 percent of the wage distribution have such access. Other employees less likely to have access to paid sick leave include part-time workers, employees of small businesses and workers in certain industries, such as service, production, transportation and maintenance occupations.

Even when sick leave is available through employers, it has to be earned over time and does not provide enough leave each year. The Healthy Families Act, for instance, would allow workers to earn a maximum of seven paid sick days per year. Given that doctors are currently requiring workers to self-quarantine for 14 days, a longer medical leave policy might be required.

For those who have exhausted sick leave, there is a patchwork of options that allow for longer durations of leave. Currently, employees are guaranteed 12 weeks of unpaid medical leave under the federal Family and Medical Leave (FMLA). However, only slightly more than half of the US workforce qualifies for coverage under the FMLA, due to tenure requirements with the employer and small business exemptions. Furthermore, the fact that it is unpaid means that, even if some workers qualify, they are not in a financial position to be able to take an extended period of unpaid leave. Recent data from the National Compensation Survey[1] reveal that only 40 percent of workers have access to paid medical leave.

The lack of both sick leave and medical leave has serious consequences. It is detrimental to the health of the sick employee, and it compromises the health of others through the spread of sickness in the workplace. Workers without sick days are 1.5 times more likely to report attending work when ill than workers with paid sick days, which is particularly concerning considering the fact that many service employees — such as restaurant and childcare workers — are among the sectors with the worst access to paid sick leave.

A recent study by Johanna Maclean, Stefan Pichler, and Nicolas Ziebarth indicates that sick pay mandates increase coverage of sick leave by 13 percentage points and that mandating sick pay likely increases welfare. In their previous work, Pichler and Ziebarth developed a model to show that availability of sick days actually reduces the spread of contagious diseases, such as the flu. Since sick employees are less productive, sick leave can actually benefit businesses by increasing productivity. Furthermore, sick and short-term medical leave can help employees stay attached to the workforce. Other research has shown that nearly 85 percent of employers reported no overall effects on their business costs and a large share of support in the wake of New York City’s Earned Sick Time Act. With medical leave policies in place, in the event of more serious and long-term illnesses, employees can take the time they need to recover and transition back to the labor force, rather than having to quit a job due to a lack of time to address their health concerns.

In the AEI-Brookings Working group report on paid family and medical leave, the group was wary of mandates for paid leave policies due to potential negative repercussions on employees, either in hiring or salaries. One option is to fund medical and sick leave as a social insurance program and through employee payroll taxes. One can justify this on the grounds that allowing workers paid days off from work when they are unwell generates a societal benefit or a positive externality. It also eases the costs on any individual worker or firm of paying for the time off.

The cost model developed by the working group indicates that a paid medical leave policy structured similarly to FMLA[2] could cost about $26.6 billion per year, which could be funded by an employee payroll tax increase of 0.31 percent.  Paid sick days could be similarly funded, and with a relatively short duration of seven days, costs would be significantly lower. Job protected paid medical leave may obviate the need for certain other types of fiscal stimulus, such as a payroll tax cut, since it would enable workers to receive a certain level of pay while being able to take time off from work to recover. As the White House ponders other ways to stimulate the economy, it may be worthwhile to go after this low-hanging fruit to create lasting policy solutions.

[1] This number is closer to 60 percent as per the American Time Use Survey; however, that survey does not distinguish between sick and medical leave.

This article by Aparna Mathur first appeared in AEIdeas.