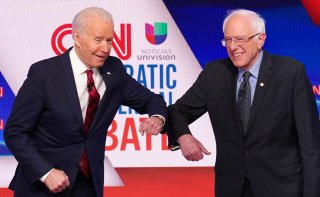 As more states cancel their primaries and reschedule them for later dates out of concern for the coronavirus, more people are wondering whether the Democratic National Convention, currently dated July 13–16, will be forced back as well. Roughly fifty thousand people attended the 2016 convention, making it a serious health hazard if the coronavirus pandemic remains ongoing.

“There are no plans to cancel the convention and we are not considering a rule change at this time,” announced Xochitl Hinojosa, communications director for the Democratic National Committee. “Contingency planning is a routine part of preparations for any convention.”

Former Vice President Joe Biden, who will presumptively be given the presidential nomination at the convention, does not believe it should be canceled. “I think we ought to be able to conduct our democratic processes as well as deal with this issue, but look, that decision will be made (based on) the state of the nation at that moment,” he said.

“It is full speed ahead until a staffer yells ‘Iceberg,” said a delegate from California.

While the DNC denies that there are any plans to push back the convention in Milwaukee, Wisconsin, others are already taking action. The 2020 Summer Olympic Games in Tokyo, originally meant to take place in late July, have already been postponed to August.

In the meantime, Democrats are taking the situation seriously and are examining contingency plans. “As we navigate the unprecedented challenge of responding to the coronavirus, we’re exploring a range of contingency options to ensure we can deliver a successful convention without unnecessary risk to public health,” said Katie Peters, a convention spokeswoman. “This is a very fluid situation—and the convention is still more than three months away. We are committed to sharing updates with the public in the coming weeks and months as our plans continue to take shape.”

The most likely alternate scenarios are that the convention takes place later in the summer, or the physical event is canceled and held electronically. Speeches from Democratic politicians would be televised with no audience, and absentee delegates would cast their ballots for candidates over the phone.

In 2016, the Democratic National Convention had a total price tag of $127 million, financed through a combination of private donations, big-ticket fundraisers, and money provided by both the host city and the federal government. The New York Times reports that while no major donors had retracted their pledge to help pay for the convention this year, fundraising had become “frozen” due to the uncertainty.

The Republican National Committee is not in as thick of a problem. Their convention is not scheduled until August 24–27, in Charlotte, North Carolina, providing more time for the government to get control over the coronavirus situation. And since incumbent President Donald Trump will be renominated without serious challenge, it will be uncontroversial.

The Democrats, however, maintain an active primary.