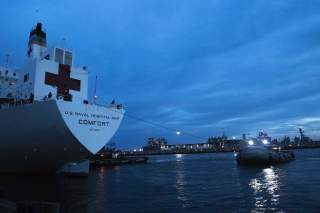 Will the coronavirus pandemic finally compel Washington to get serious about replacing the only two hospital ships in the U.S. fleet?

It’s unclear. What is clear is the value of the ships not only during overseas military campaigns, but during domestic crises, as well.

U.S. Military Sealift Command has activated both of its gargantuan hospital ships and is deploying one each to New York City and Seattle starting in late March 2020 in order to help relieve pressure on civilian hospitals in both cities that are struggling to handle thousands of coronavirus patients.

USNS Comfort is heading to New York City. Sister ship Mercy is bound for Seattle. Built on tanker hulls during the 1980s, the ships displace around 60,000 tons of water and with their crews of up to 1,300 can handle more than a thousand patients at time.

But Comfort and Mercy are old. And for all their worth during emergencies, the Navy has yet to formulate a plan for replacing the ships that it can afford and which politicians are willing to support.

For years, the Navy tinkered with different ideas for replacing Comfort and Mercy. One proposal was to abandon the huge, purpose-built ships in favor of containerized field-hospital-style facilities that the fleet could install on any vessel with adequate space. Candidate platforms included the catamaran transports and T-AKE-type supply ships.

“The problem with those [hospital] ships is, there’s only two of them, and they’re big, and we’re moving to a more distributed maritime-operations construct,” Vice Adm. William Merz explained at an April 2018 congressional hearing.

By late 2019, however, the fleet had settled on a traditional approach. It would acquire direct replacements for Comfort and Mercy on large, purpose-built hulls. At the time, the Navy was asking the administration of Pres. Donald Trump to include in its 2021 budget proposal funding for a new ship type it called the Common Hull Auxiliary Multi-Mission Platform, or CHAMP.

There were several versions of CHAMP in the Navy’s plan. A sealift ship. A submarine tender. A hospital ship. Each ship using a CHAMP hull would displace tens of thousands of tons of water and cost at least a billion dollars.

But the White House nixed CHAMP, calling the type too expensive for flattening shipbuilding budgets. The decision coincided with a broader collapse of Navy budgetary planning that included a major retreat from a years-old requirement to grow the front-line fleet from 295 ships to 355.

Instead of proceeding with CHAMP, the White House urged the Navy to buy used commercial ships and convert them into naval auxiliaries.

“The Navy should not proceed with CHAMP development for a sealift vessel and should seek legislative relief to procure additional used sealift vessels in the [fiscal 2021 National Defense Authorization Act],” the White House explained in a memo. “Procuring used sealift vessels and submarine tenders would also allow the industrial base to prioritize the administration’s battle force ship procurements.”

The memo didn’t specifically address the Navy’s need for new hospital ships. But if Congress doesn’t override the White House’s decision and the Navy fails to resuscitate CHAMP, then the fleet might have no other option for replacing Comfort and Mercy in the coming years.

In that case, the Navy’s new hospital ships will be … old ships. But with new medical facilities.