Coronavirus Shows That China Is Not As Strong As Americans Fear 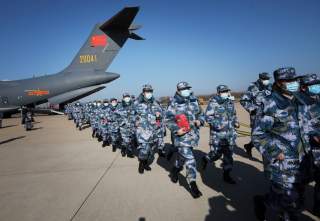 Despite China’s incredible economic success as of late, it’s important to remember that it is still fundamentally a communist country.

Recent events have been a stern reminder.

Freedom can be messy, but it’s nothing like the mess an authoritarian regime creates when it fears losing power.

The disturbing outbreak of the coronavirus (2019-nCoV) in China and the communist government’s response to it should be a reminder of the consequence of a system based on state control, without rule by the people and a vibrant civil society.

Many are impressed by the fact that China built a 1,000-bed hospital in 10 days—by employing about 7,000 people who worked around the clock.

However impressive that feat might be, it’s important to consider how dangerous the virus has become and the lack of communication and coordination that could have taken place to avoid having to take such extreme measures.

The virus initially broke out on Dec. 8 in China’s Wuhan province. Instead of immediately informing the public and bringing awareness to a potential outbreak of a highly contagious disease, the local governmental authorities waited three weeks to inform residents.

The Chinese government also actively attempted to suppress information about the outbreak as it escalated sharply.

“That’s clearly unacceptable, especially in light of the SARS experience, when a Chinese cover-up also occurred, and in light of the high domestic and international travel rates of the Chinese people today,” wrote Peter Brookes, a senior fellow for national security affairs at The Heritage Foundation. “To minimize the spread of any potential epidemic, a host country must not only respond rapidly, but provide full transparency to advise not only its own citizenry, but the international community as well.”

While these actions (or inactions), so far at least, have mostly affected the people of China alone, a raging pandemic could have global consequences.

A century ago, a flu epidemic killed more people than died on all the battlefields of World War I combined. The Centers for Disease Control and Prevention noted that some estimates suggest about one-third of the entire world population was infected at some point.

We may be better at treating and containing disease these days, but this is still serious stuff.

The Chinese government in Beijing was clearly more focused on saving face for the regime than efforts to successfully contain the virus.

Even now, it’s hard to tell exactly what’s happening in China as the economy is being roiled by shutdowns and infection and death rate numbers seem untrustworthy.

That’s not to mention the smattering of images and videos coming out of the country, some of which may be fake or misinformation, but it’s hard to trust any official pronouncements, given Beijing’s clear attempts to suppress news from shining a light on the situation.

It’s notable—given China’s clear economic advancements of the past few decades, thanks to its abandoning communist economic theories—that the regime has not let go of its absolute power over society.

China is still communist, and communism, as it’s practiced in the real world, is about absolute control.

If anything, the economic advancements are now working alongside an authoritarian retrenchment as President Xi Jinping seizes more power and the Chinese Communist Party uses its increased technological prowess to create more tools for tyranny.

That factor distinguishes Chinese society under communism from the American system, in which free speech is a protected right and a vibrant civil society allows information to spread quickly.

“The government has tightened its grip on the internet, the media, and civil society. It has deeper pockets and a greater ability to control the flow of information across the country,” wrote Li Yuan in The New York Times, comparing China of today to how it was during the SARS outbreak. “As a result, many of the media outlets, advocacy groups, activists and others who held the government accountable in 2003 have been silenced or sidelined.”

We may not build hospitals in 10 days with forced labor, but we are better able to create conditions where we don’t have to.

As with the repression of likely millions of Muslim Uighurs and the crackdown on Hong Kong protesters, the coronavirus outbreak is a reminder—especially for those around the globe who are indifferent to the threat of China—of just how different a free society is from the Chinese communist one.

Jarrett Stepman is a contributor to The Daily Signal and co-host of The Right Side of History podcast. Send an email to Jarrett. He is also the author of the new book, "The War on History: The Conspiracy to Rewrite America's Past." This article first appeared  earlier this year.