The Coronavirus Shows How Americans Would Suffer Under Real Centralized Planning 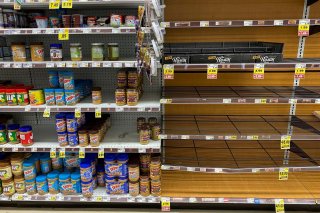 With confirmed COVID-19 cases rising exponentially and the economy in a bear market for the foreseeable future, scores of voices from both the left and the right have called for extensive government intervention to protect America’s health and finances. This turn toward government has plenty of far-left commentators remarking, “everyone’s a socialist in a pandemic.”

While the coronavirus has proven to be the exception to many ideologies’ rules, it doesn’t take an anarchist to see how the central, nationalized government response has been weak and cumbersome. In comparison, responses from city and state governments and private businesses have been rather nimble. If anything, the pandemic has taught us how dangerous a centrally-controlled economy would be to our daily lives.

Consider what’s perhaps the most obvious sign of the times––empty store shelves. After capitalists have pointed to the empty stores of centrally-planned countries like Cuba and Venezuela for years, numerous left-wingers were quick to note that mostly-capitalist America was suffering the shortages that supposedly happened in socialist countries.

Though more snide than serious, this argument falls flat in several ways. If it takes a once-in-a-generation pandemic to stretch markets’ ability to the shortages that centrally-controlled economies suffer regularly, that’s a strong indication markets do a pretty sufficient job providing goods.

And, anyway, even during this crisis, shortages are short-lived. Contrary to what many have been fearing, supply chains for basic items like bread and toilet paper aren’t disrupted. The only issue is delivering fast enough to meet demand. Krogers in the midwest are opening an hour later and closing an hour sooner to give employees more time to stock shelves.

Shortages would also be fewer or nonexistent if supermarkets’ pricing were less regulated. Anti-price gouging laws prevent stores from raising prices much in response to this sudden surge in demand, so the number of items people want at the sale price is far exceeding the number of items available. If stores were able to, say, raise toilet paper prices by a dollar a roll, we surely would not see shoppers swarming the bath tissue aisle—they’d have to exercise discretion, naturally leaving more for the shoppers behind them.

Some businesses have encouraged social distancing faster than the government, too. Popular restaurants like Chick-Fil-A, Taco Bell and Starbucks eliminated dine-in eating before state governors started mandating similar actions. Universal Pictures committed to releasing some of its current theatrical releases on-demand, thus making them viewable from home. Dollar General and Stop & Shop, among other businesses, have designated “senior only” shopping hours so that vulnerable customers can gather supplies as safely as possible. The list goes on.

Obviously, businesses still must operate within the market frameworks governments set. Thankfully, state and local governments are peeling away many regulations inhibiting private organizations from serving their communities. For instance, the Department of Health and Human services deregulated physician licensure so that medical professionals can practice across state lines, which will help our medical talent serve where they are most needed.

That’s an example of good news, and of lessons learned––bureaucracy and regulation are partially responsible for the outbreak getting out of hand. Private labs were offering countermeasures to the virus months before the White House acknowledged coronavirus was a pandemic. For example, Roche was working on high-speed, high-volume tests just days after China first announced an unusual cluster of “pneumonia” cases on December 31, 2019. That is an agility the public sector cannot match––yet not until March 13 did Roche receive FDA approval for its test, and even then it was an emergency authorization. One can only guess how much more efficiently the virus could’ve been contained if the permission process had concluded much sooner.

Indeed, when uninhibited, the healthcare industry can step up. In Indiana, for example, pharmaceutical giant Eli Lilly is piloting the state’s drive-thru testing facilities, without cost to the government or patients. Other state and local drive-thru testing efforts have accelerated much quicker than the federal government’s efforts. Home diagnostics startup Everlywell developed a home-based coronavirus test just 10 days after the FDA gave the go-ahead. And tech billionaire Elon Musk may repurpose Tesla and SpaceX facilities to help cover a national ventilator shortage.

The common bond between all Americans is the desire to contain and mitigate COVID-19 as much as possible. But not all organizations are created equally. There is a clear nimbleness to the private sector that the federal government cannot have. So while it is understandable to turn to the most powerful force in America to solve one of the most powerful threats in our history, what we actually need is speed and innovation. If this fight were entirely in the hands of the federal government, we likely would be further behind than we are now. It is during crises like these we are grateful for decentralized power.