Coronavirus Stimulus: What's In It For Defense? 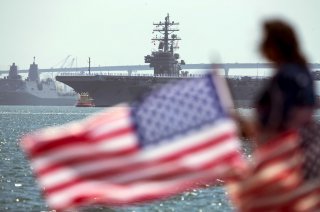 President Trump recently called himself a wartime president for confronting a pandemic that threatens the lives and livelihood of so many Americans. Congress heard the (bugle) call and responded with what Senate Majority Leader Mitch McConnell (R-KY) called a “ wartime level of investment into our nation.”

Calling coronavirus (COVID-19) the "invisible enemy," the president has called for “shared sacrifices” and a “response unseen since World War II .”

The president is getting a hefty fiscal fix through a $2 trillion stimulus spending bill moving to his desk shortly for signature. Spanning nearly twenty years of conflict, the wars in Iraq and Afghanistan cost the taxpayer roughly $1.5 trillion dollars by comparison.

The stakes are high, and no one is immune. The military is ramping up to support state and local authorities in responding to the pandemic. The Department of Defense is also confronting the rise of infected servicemembers, families, and defense civilians, all while it deals with impacts on the defense industrial base – the Defense Department needs this new funding.

Defense spending in the stimulus totals $10.5 billion, with likely more to come later. Of this, $1 billion is allocated to the Defense Production Act (DPA), and the bill waives several restrictions to supercharge it for pandemic recovery. Other priorities include $1.5 billion for working capital funds, $1.2 billion for uniformed personnel, $2 billion for Operations and Maintenance, nearly $5 billion for the Defense Health Program, and $2.8 million for the Armed Forces Retirement Home.

This funding demands strident supervision. Mark Cancian from the Center for Strategic and International Studies explained that the Defense Department’s original request for supplemental emergency funds involved the creation of a “slush fund.” Congress rejected the concept and used various provisions to strike a helpful balance between the immediate funding needs of the U.S. military and the flexible spending authorizations necessitated by the current crisis.

First, the Pentagon has been granted greater flexibility over the use of its working capital funds, which buy support, maintenance, and supply functions. This will allow the Pentagon to inject much-needed liquidity into the industrial base by accelerating payments to contractors, and it will protect small businesses who may require extra financial support right now.

Tucked inside the bill is also more flexibility for using DPA funds. Currently, it waives requirements that traditionally delay DPA funded projects. As a result, defense officials have time to respond to impending crises in subsectors of the defense industrial base. This will be important, as prime defense firms rely heavily on subcontractors and vendors .

The bill removes various restrictions on contractors under Undefinitized Contract Actions to allow contractors to begin work on projects before a final agreement on contract terms is reached. The stimulus also removes constraints on Other Transaction Authority contracts, which allow contracting officers to circumvent normal but byzantine purchasing rules and regulations. Removing the restrictions will allow the Pentagon to solicit immediate help in pandemic response from innovative companies and small businesses.

The legislation also separately secures continued leadership from the Department of Defense. Senior military officials have been allowed to extend their tenure during the current crisis. In case the Senate is unable to confirm their successors, continuity is assured.

Congress has acted to take care of immediate COVID-19 response, posture the military to support a broader governmental response, and allow the Department of Defense to support its industry partners as they continue to provide services that are critical to the continued national security interests of the United States.

But no policymaker should lull themselves into thinking this is all that will be needed to combat a global pandemic, which now has the United States leading the world in diagnosed cases. This virus is not the conventional fight our armed forces trained to defeat. Still, they must apply their world-class skills to support their federal partners and eradicate this invisible enemy for good.

This article by Mackenzie Eaglen first appeared in Real Clear Defense on March 3, 2020.