Coronavirus Unemployment Keeps Going Up—Will It Go Back Down? 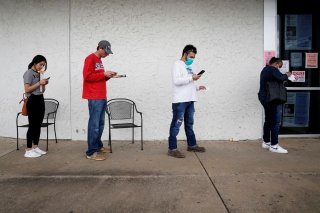 Today’s initial unemployment benefit claims report showed, for the week ending April 4, 6.6 million Americans filed an initial claim for unemployment insurance (UI) benefits. Combined with revised claims data from the preceding two weeks, a total of 17 million Americans filed initial claims in the past three weeks. Benefits vary by state and worker, and UI pays an average of $372 per week in benefits nationwide. Recent federal emergency legislation adds $600 per week through July 2020 to each UI check.

The sheer scale of this demand for UI benefits is without precedent. The past two weeks have seen applications for UI benefits at levels nearly ten times the previous weekly record of 695,000 set in October 1982. In fact, more people filed an application for UI benefits two weeks ago (almost 6.9 million) than were ever on UI benefits at any point since the program was founded in the 1930s (the prior record of continuing claims, which reflect those that have already been processed and approved, was 6.6 million in 2009). Continuing issues in some states handling the unprecedented surge in applications is probably holding down the true level of initial claims, which will be reflected in future weeks.

Continuing claims were almost 7.5 million during the week ending March 28. When the continuing surge in initial claims is processed and added to those already collecting benefits, we should learn that well over 18 million Americans are now on UI — already almost three times the prior record level set during the Great Recession in 2009.

State agencies are struggling to respond to this historic surge in demand for UI benefits, which is complicated by their additional responsibility to set up new unemployment benefits (the $600 supplements, among other benefits) and a new program called Pandemic Unemployment Assistance, which is designed to serve those not previously eligible for the regular UI program.

This article by Matt Weidinger first appeared in AEIdeas on April 4, 2020.