The Corruption of the American Friends Service Committee 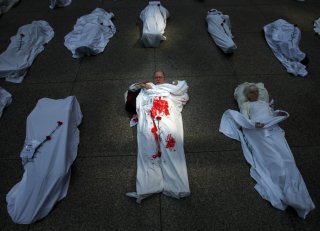 The American Friends Service Committee (AFSC)—the official non-governmental organization of the Society of Friends or the Quakers—won the Nobel Peace Prize in 1947. They deserved it. The group, true to Quaker theology, professed non-violence and eschewed any groups perpetrating it. Quakers may have been conscientious objectors during the war, but such views neither demanded political conformity nor translated into support for America’s adversaries or regimes that would employ violence against their own people. They did nothing, for example, to enable Nazis to better their economy or facilitate Soviet purges. “The Goodness of God Is Demonstrated in Brotherly Love,” the Norwegian Nobel Committee declared when awarding the AFSC the prize, citing their work helping post-war reconstruction in France, assisting Jewish refugees, interned Japanese-Americans, and prisoners-of-war.

The award itself, however, marked a pivot point for the AFSC. It cast aside the careful relief operations that characterized the previous three decades of its activities, and set its aspirations on the political and diplomatic. Accepting the Nobel Prize, AFSC Executive Secretary Clarence Pickett, announced that the organization would dedicate the associated money to further Quaker proposals to improve Soviet-American relations.

Perhaps it made sense for a group dedicated to pacifism to seek to facilitate peace between the two rival superpowers but Soviet dictator Joseph Stalin had little interest in compromise. The AFSC’s post-Nobel ambitions came less than fifteen years after Soviet dictator Josef Stalin starved to death almost four million Ukrainians in “the Holodomor,” and just a decade after he murdered one million more in “the Great Purge.”

Stalin had no tolerance for dissent and a Manichean view of power. Recognizing the immutability of Stalin’s position, the AFSC’s project effectively demanded the United States make greater accommodations to the Soviet Union’s positions. It abandoned its political neutrality and hired a professional, permanent staff, only a minority of whom were Quaker. Rather than anchor themselves to Quaker principles, the revamped AFSC prioritized politics while wearing the mantle of legitimacy born of a Nobel Peace Prize awarded at a time the group operated under a different value system and code of conduct.

The AFSC’s substitution of Quaker theological principles for subjective progressive politics colored subsequent activism and often put it in the bizarre position of promoting violent and even genocidal groups over their victims.

Many progressives castigate the United States for the Vietnam War, but the reality of the conflict was murkier. Ho Chi Minh may have depicted himself as a nationalist but he often subordinated Vietnamese interests to those of his Russian sponsors and advisors. Nor was the United States the only aggressor: North Vietnam invaded first Laos and then their southern neighbor. South Vietnam might have been corrupt, but so too was North Vietnam. Quakers might oppose U.S. policy but, as Henry Bowden, a Rutgers University professor of religion, explained, prior to the Vietnam War, “The idea was to alleviate the suffering from war, not to find politics in it.”

The overt decision by AFSC leadership to do otherwise led the AFSC down the path of moral perversity. During the 1970s, the AFSC defended Cambodia's Khmer Rouge, even as word emerged that the group had killed one million citizens. In Peace and Revolution: The Moral Crisis of American Pacifism, political scientist Guenter Lewy described how John McAuliff, head of the AFSC's Indo-China division, called reports of massacres a U.S. attempt to discredit “the example of an alternative model of development.” McAuliff was the rule rather than the exception. New England Regional Director Russell Johnson dismissed the “bloodbath stories” as motivated both by “a new wave of anti-communism” and Washington’s desire to punish those countries who sought “to close their boundaries to exploitation by multinational corporations seeking raw materials, markets for surplus, and cheap labor.” In effect, the AFSC and Quakers who embraced it talked of non-violence but provided cover for a group directly responsible for the murder of at least one million Cambodians.

The AFSC has repeated its mistakes with regard to North Korea. The group explains, “AFSC’s concern for the Korean peninsula stems particularly from the suffering caused by the Korean War in which the United States was a major combatant.” While this is true—the United States led a coalition operating under United Nations auspices—China and the Soviet Union were also combatants, though the AFSC’s one-sided narrative does not acknowledge this. Nor does the AFSC mention that the war began with North Korea’s surprise invasion of its southern neighbor.

While the AFSC operates projects to bolster collective farm productivity in the North, it conducts no parallel projects in South Korea. Nor does its literature acknowledge that its collective farms are effectively slave-labor camps. The AFSC might claim the moral high ground, but their actions are akin to a foreign NGO helping modern-day China making child labor more productive.

Next, consider Iraq. The AFSC was in good company in its opposition to the 2003 Iraq War, but it went beyond mere opposition when it made common cause with Saddam Hussein’s regime: It actively bolstered Iraqi propaganda accepting and promoting the calumny that U.S.-supported sanctions killed 500,000 Iraqi children. Neither the AFSC nor its allies mentioned that Saddam’s regime provided those numbers nor did the AFSC correct the record when that claim proved false. The AFSC was silent, however, to the victims of Saddam’s regime who suffered his chemical attacks or ended up in mass graves. As Barham Salih, then a leading Iraqi Kurdish opponent of Saddam and now Iraq’s president, told a January 2003 meeting of the Socialist International, “To those who say ‘No War,’ I say, of course, ‘Yes,’ but we can only have ‘No War,’ if there is ‘No Dictatorship’ and ‘No Genocide.’”

The AFSC is especially active today in the Israel-Palestine conflict, not as a neutral party seeking to alleviate suffering or further dialogue, but rather as a partisan force. Asaf Romirowsky and Alexander H. Joffe discuss AFSC activities in detail in their book, Religion, Politics, and the Origins of Palestine Refugee Relief. The two scholars document how the Quaker group worked with the Palestine Liberation Organization at the height of its terror campaign against Israel and worldwide Jewry and instructed workshop participants to ignore anti-Semitic remarks. Such policy has led the AFSC down a curious moral path. In 2008, for example, the AFSC co-hosted a gala dinner for Mahmoud Ahmadinejad, Iran’s Holocaust-denying president. AFSC Spokesman Mark Graham defended the AFSC’s dalliance with Ahmadinejad. “There are many points where we disagree with Iranian policy [but] we believe dialogue is the way to understanding and moving past tensions rather than threats and standoffish behavior,” he said. Such an explanation, though, only heightens the hypocrisy of the AFSC’s calls to boycott the Jewish state.

The AFSC continues to cite its Nobel Laureate status to bolster its moral authority, but those days are gone. The AFSC has soiled its moral legacy as much as Burmese politician Aung San Suu Kyi and Ethiopian dictator Abiy Ahmed have. In its letters and pronouncements, it makes common cause with radical groups like Code Pink and the National Iranian American Council, a group whose founder Trita Parsi once defended Female Genital Mutilation. It has become a group that remains silent on the incarceration of Chinese Uighurs, dines with Holocaust deniers, and works with Hamas terrorists who openly call for the murder of homosexuals.

Most Quakers have no idea how the group which acts in their name has eschewed the values for which they stand. That is a failure of oversight and the result of many permanent AFSC employees prioritizing political agendas above theological principles. The tragedy here is not simply that the Society of Friends is increasingly associating itself with those who ridicule its principles, but that the roles that an organization like the pre-1947 AFSC once upheld increasingly go unfilled.