Could Aircraft Soon Be Taking Off From America's Submarines? 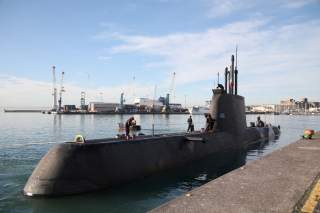 Key point: The Cormorant fell victim to budget cuts in 2008, it seems. But it’s hard to believe such a useful idea truly just went away.

If submarines possessed the high vision and quick speed of aircraft, they could dramatically extend their reach. If aircraft took off and landed from underwater platforms, their staging and strikes would be stealthier and more secure.

But combining the two epoch-making weapons has proved difficult. Only one country really pulled it off—and too late to win a war. But the tremendous potential of the aircraft-sub combo may make an historic comeback thanks to drones and Special Operations Forces.

The underwater stealthiness of submarines comes with a great downside—blindness. Subs rely on a few sensors—and help from other military assets—to comprehend their environments.

By carrying and deploying a small airplane, a submarine could dramatically expand its ability to look around itself.

But even a small sub-launched plane needs a large and heavy pressure-proof hangar to ride in while the sub submerges. Early on, only the largest subs had room for such bulky hangars.

After World War I, the British replaced an M-class sub’s 12-inch gun with an aircraft hangar. The sub-carrier sank when the hangar flooded. The French “submarine cruiser” Surcouf, the largest undersea boat in the world in the 1930s, carried a small folding plane for spotting targets for its twin eight-inch guns.

A Soviet designer came up with a submersible airplane. Though never built and full of technical loose-ends, U.L. Ushakov’s 1934 design featured a thick, manta-ray-style wing and narrow fish-like body, complete with a conning tower. Ushakov did not specify how he would seal the three radial engines against saltwater.

The machine supposedly would have flown out to sea, landed on its pontoons like a normal seaplane then flooded spaces within its wings and hull to sink. Approaching its target under electrical power while submerged, the flying sub could observe using its periscope or fire its two torpedoes.

We have no idea how well Ushakov’s clever concept would have worked in combat because the Soviets never built it. But we do have a good idea of how the Japanese would have used their submarine aircraft carriers, because they almost actually used them in battle.

Adm. Isoroku Yamamoto, who led Japan’s raid on Pearl Harbor, believed Japan had to carry the war to the American mainland. Japanese subs had already launched individual aircraft over U.S. shores. Bigger submarine carriers could get past U.S. defenses to launch air strikes on strategic targets like the Panama Canal.

Yamamoto’s vision drove Japan to create the largest non-nuclear subs ever. The Sen-Toku subs carried three Seiran bombers and enough fuel to steam around the planet. Ace crews could surface, load and launch the Seirans at night in just 45 minutes.

But the emperor’s broadcast surrender decree in August 1945 stopped the five giant subs of SubRonOne from attacking the huge U.S. Navy anchorage at Ulithi Atoll. The Americans seized the Sen-Tokus, studied them and subsequently sank them to prevent the Soviets from discovering their secrets.

In the 1950s both Soviet and American engineers explored the idea of submarine aircraft carriers. Between 1958 and 1964 the U.S. Navy installed Regulus nuclear-armed cruise missiles aboard specially-equipped subs, including USS Halibut, pictured.

Regulus was essentially a drone with a three-megaton warhead and a 500-mile range. Like the Sen-Tokus, a Regulus missile sub had to surface to launch the big drones, potentially exposing it to detection.

Guided missile submarines like Halibut and later ballistic-missile boats successfully melded the undersea and aerospace realms. But they were essentially very-long-range naval artillery rather than aircraft carriers. The sub-launched missiles were one-shots, not recoverable aircraft.

The “Flying Sub”—the yellow object in the banner photo at the top of this story—became one of the pop icons of the 1960s when Irwin Allen introduced the craft on his TV show Voyage to the Bottom of the Sea. Even 50 years later, the manta-shaped sub looks incredibly futuristic, but it’s possible it drew inspiration from a real concept.

In 1962, Convair pitched the Navy a submersible aircraft design. Like the Ushakov plane, the Convair design would fly to a search area then land on water and submerge to continue its mission.

Convair released some details from the study in 1965. Like the Ushakov, the High Density Seaplane had pressure-proof compartments, floodable voids and three engines with watertight doors. Also like the Ushakov, there is no sign it was ever built.

Allen’s research assistant and librarian Elizabeth Emanuel compiled an impressive archive for her boss, who developed a passion for underwater adventures. The archive so impressed undersea explorer Jacques Cousteau when he visited the TV producer that he tried to hire her away.

It’s possible Emanuel had found and brought news of Convair’s San Diego-based research to Allen, providing the basis of the fictional Flying Sub.

In the late 20th century, the Navy perfected the Regulus concept by developing the sub-launched Tomahawk cruise missile. A cross between a drone and a flying torpedo, the jet-powered Tomahawk is the Pentagon’s long-range strike weapon of choice.

The submarine USS Florida launched scores of cruise missiles to destroy Libya’s coastal air defenses in the opening hours of the 2011 assault on Muammar Gaddahfi’s regime.

But at almost $2 million a shot and with no return capability, a Tomahawk makes an expensive spotter plane or comm relay.

In 2003, the Pentagon’s fringe-science Defense Advanced Research Projects Agency launched a study of reusable submersible aircraft. In 2006, Lockheed Martin evolved this Multi-purpose Unmanned Aerial Vehicle into the Cormorant project, named for the seabird which can dive to astonishing depths.

The Cormorant engineers solved the storage problem by fitting their plane into a missile sub’s existing launch tube. The 19-foot-long drone would make up for the seven Tomahawks it replaced with its endurance and reuseability.

To minimize detection risk while the Cormorant launched, the sub would release the drone underwater then sail away. Compressed gas would then drive the plane to the surface where its rocket motors would fire and loft it into the sky.

Once in the air with its wings unfolded and its jet engine breathing, the Cormorant would range as far as 500 miles and as high as 35,000 feet. At the end of its mission, the drone would return to the sub’s vicinity, deploy a parachute and splash into the sea a short distance away. The vessel’s crew would send a swimming robot to tow the aircraft back to the waiting submarine.

Tucked away in the patent application for the drone is a hint of an unexpected side capability. A drawing shows a Cormorant launching from a small surface ship, thus making any vessel a potential drone seaplane tender.

The Cormorant fell victim to budget cuts in 2008, it seems. But it’s hard to believe such a useful idea truly just went away.

Not long after the Cormorant project ended, engineers at the Naval Surface Warfare Center at Carderock designed a submersible aircraft for special operations.

Like Ushakov’s pioneering design, it’s a flying wing on pontoons, full of hollow spaces and a pressure compartment. Thirty-four to 36 feet long with a wingspan of between 90 and 110 feet, the Carderock flying sub might carry six Special Operations Forces troops and two pilots some 800 miles in the air and up to 12 miles underwater.

Fantastic as the notion is, flying subs and sub carriers still beckon. Drone technology and advances in material science could finally make these fantastical weapons feasible.