Could Belarus Launch Its Own Invasion in Eastern Europe? 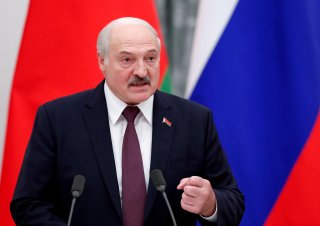 Earlier this week, a fake Time magazine cover comparing Russian president Vladimir Putin to Nazi Germany's Adolf Hitler circulated on social media. While it wasn't an actual cover from the weekly news magazine, it was such a strong image that it went viral across the internet. It had been created by Welsh graphic designer Patrick Mulder, who felt the actual cover from Time had been "uninspired and lacked conviction."

Mulder is far from alone in comparing the Russian leader to Hitler. Putin's tactics—from false flag operations to his justification for the invasion—could be from a page out of the Nazi leader's playbook. Given those comparisons, it isn't surprising that Belarusian president Alexander Lukashenko has been increasingly compared to Italian dictator Benito Mussolini.

Lukashenko was called the "Mussolini of Minsk" nearly a decade ago because elections in Belarus were not considered to be free and fair. Lukashenko, who has been dubbed the "last dictator" in Europe, has served as president of Belarus since the establishment of the office in July 1994, making him the longest-serving European president. However, his disputed victory in the 2020 presidential election led to widespread allegations of vote-rigging. As a result, he is not recognized by the United Kingdom, the European Union, or the United States as the legitimate president of Belarus.

Just as Mussolini followed Hitler's lead in attempting to conquer Europe, the Belarusian leader could be looking to follow Putin in attempting to expand his borders by mounting an invasion of a neighboring state. Images emerged on Tuesday of Lukashenko addressing his security council while standing in front of a battle map that appeared to suggest a planned invasion of Moldova. The map appeared to show troop movement plans and infrastructure targets in Ukraine, as well as targets in Moldova's breakaway region of Transnistria, The Hill reported.

Belarus is also poised to send troops into Ukraine to aid the Russian invasion. The potential movement of troops was noted by Belarusian journalist Tadeusz Giczan, who said on Tuesday that "at today's security council meeting, Lukashenko showed what looks like an actual invasion map. It shows Ukraine military facilities destroyed by missiles from Belarus, attacks directions (everything agrees except Odessa-Transnistria). Also, Ukraine is divided into 4 sectors."

Moldova, like Belarus and Ukraine, was a former Soviet state. Transnistria has remained an area controlled by pro-Russian separatists, and the Moldovan government hasn't actually exercised any authority in the region since 1992.

As Lukashenko appears willing to stand by his Russian ally, the United States and other nations have begun to sanction Belarus. The United States announced on Monday that it would suspend operations at its embassy in Minsk, and the EU also announced plans to impose new sanctions on Belarus over its role in the war, including measures against exports, oligarchs, and banks in the country.