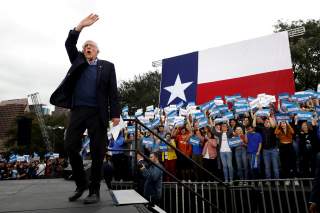 For decades, it’s been an electoral goal of the Democratic Party to turn Texas blue. The Lone Star state, which has thirty-eight electoral college votes, forms the keystone of Republican presidential campaigns. If the Democrats were able to win Texas, something they haven’t accomplished since 1976, it would be close to impossible for the Republican Party to win the White House again. Now, the Bernie Sanders campaign is promising to do just that.

Yesterday Chuck Rocha, a senior advisor to the Sanders campaign who orchestrated Latino outreach in Saturday’s Nevada caucus, spoke with Hill.TV about the strategy. “It’s a reflection of direct investment in the community. I want to do something, Senator Sanders wanted to do something, Jeff Weaver, the team wanted to prove a point. If you invest in Latinos, they will vote.”

The senator from Vermont won the Nevada caucus by a substantial margin, 40.5% on the final popular vote. This translated to 46.8% of the county convention delegates allocated by the caucus system, and 24 additional pledged delegates towards the Democratic National Convention. This margin of victory was made possible by Sanders’ strong numbers among Hispanic voters, which he won with 54% according to an NBC entrance poll.

“We have been talking with them for eight months. And we’ve been talking to them where they were, at their home, on their cellphone, on their radios. And that’s how we delivered it,” explained Rocha. “You do that with the perfect candidate who stays on message all the time, who is lifting up the voices of working people, then you have the tsunami you saw on Saturday.”

Rocha believes this can be repeated in Texas, where over 37% of the population is Hispanic. He emphasized that the minority is not a monolith, and each community (in North Texas and South Texas, for instance) has its own traits. He believes the Sanders campaign can sweep this population in both the primary and general election “by going directly to them.” The most recent polling gives Sanders a narrow lead over former Vice President Joe Biden in the Democratic primary.

Democratic aspirations for the state were most recently placed on former congressman Beto O’Rourke, who challenged incumbent Senator Ted Cruz in 2018. Running a superstar campaign that broke national fundraising records, O’Rourke came within less than 225,000 votes of unseating Cruz. This margin (2.6%) is the closest a Democrat has come to winning a Texas senate seat since 1988.

An expanded view puts the race in context. Incumbent Republican Governor Greg Abbott was reelected with 56% of the vote, well over Cruz’s 51%. And O’Rourke received 400,000 more votes than the Democratic gubernatorial candidate. It’s entirely possible that the more well-liked Abbott carried Cruz across the finish lines on his coattails.

Beto O’Rourke briefly joined the 2020 Democratic presidential primary but dropped out in November 2019.