Could China Build Its Very Own F-35B with Russia's Help? 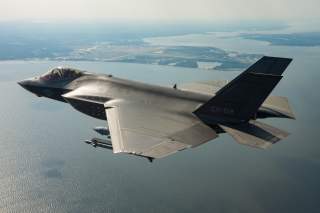 A tighter military-industrial relationship between Beijing and Moscow could open the door to accelerated vertical take-off fighter development for both powers.

As China’s Navy continues its rapid progress, teething problems are inevitable, and recent reports suggest that there have been issues with its first carrier-borne fighter, the J-15. Indeed, the PLA Navy’s aircraft carrier force has suffered its first pilot casualties in carrier training and testing operations. To be sure, carrier operations are inherently dangerous, so such setbacks are not at all surprising. Yet, they do prompt questions about the future of Chinese naval aviation, more generally.

The Chinese military press has been rife with speculation for years about whether either J-20 or J-31 could form the basis for the next generation PLA Navy carrier-borne combat aircraft. There have been very substantial hints, moreover, of a Chinese combat drone (similar to the U.S. Navy X-47) that could be launched from carriers. In this Dragon Eye column, I have frequently noted that PLA Navy helicopter aviation, notably the Z-18 and the Z-20 models, coming online in the next decade will have an equally important role in the evolving military balance in the Asia-Pacific region. These new helicopters will operate off many PLAN vessels, including the much-anticipated Type 075 helicopter carrier that is now perhaps being built. But an interesting question remains—will Beijing’s naval planners opt for vertically launched (STOVL) fighters as well? In other words, does China want its own F-35B?

In this column a couple of years ago, I broached that same question and presented some evidence, including a Chinese source claiming that Beijing had imported a Russian Yak-141 STOVL prototype back in 1994 to study. Here, the plot thickens just slightly as a late 2017 issue of the Chinese naval magazine Naval and Merchant Ships [舰船知识] featured a lengthy and detailed translation of an interview with one of the Soviet Union’s top STOVL test pilots, Andrei Sinitsyn [Андрей Синицын]. The tantalizing Chinese headline reads: “Surpassing the F35-B? [超越F-35B?]”

Much of the interview with the ex-Soviet test pilot could serve as a warning for China to steer clear of STOVL or “jump” jets. He begins by explaining that the related technologies for jump jets are extremely complicated and, moreover, that experience flying conventional fixed-wing aircraft or helicopters “is of rather limited help [似乎没有任何帮助]” in training pilots for STOVL aircraft. These pilots must have an unusual level of psychological resilience to withstand the challenge of mastering these unique aircraft. He does admit that AI technologies [自动化] have eased the burden on these pilots to some extent, but he also relates that jump jet pilots experience extreme negative effects to their eyes and also their spines related to G-forces in landing and takeoff maneuvers. He shares the observation that jump jet pilots experience a high level of anxiety [高度紧张] and notes that many of his colleagues were saved by ejection seats. If Chinese readers needed any more caution flags, Sinitsyn says the Yak-38 could not compare to Su-25 aircraft performance in Afghanistan.

Nevertheless, the older test pilot simultaneously suggests that jump jet technology has a bright future. He makes the essential point that the main advantage of STOVL aircraft, of course, is that they require only a small and austere launch area. In a revealing sentence that might have reverberations in Chinese naval circles, Sinitsyn relates: “… flight results also proved that the Yak-38 can convert any single barge into an aircraft carrier [飞结果也证明雅克-38可以将任1艘何驳船变为1艘航母].” It is quite clear that the second generation aircraft Yak-141 could not be considered a total development success. Just four exemplars were actually built, according to the ex-Soviet test pilot. However, he heaps praise on the aircraft, which he says amounted to a huge advance over its predecessor, the Yak-38. He notes that the Yak-141 is 60 percent heavier and he further relates that in respect to landing and takeoff stability, “there was never the slightest feeling of uncertainty [没有任何不适的感觉].”

The ex-Soviet test pilot goes on to explain that STOVL aviation requires an immense commitment of a country’s time and resources. With some evident bitterness, he says that all the talk about various plans does not amount to a genuine commitment. The UK armed forces are cited as a model since he notes that Britain has used jump jets both in its navy and in its other services as well. On how the Soviet program was canceled, by whom and for what reason, he professes that he’s still not clear. He asks: “Did they understand the power of vertical takeoff fighter jets [他们是否了解垂直起降战机的作战能力]?”

His complaint above is underlined by the subsequent comment that the USSR was, to his estimate, ten to twenty years ahead of the West in its research of jump jets during the late 1980s. Continuing this line of reasoning, Sinitsyn goes on to claim that the U.S. F-35B employs some technological breakthroughs from the Yak-141 and that certain of its design elements are “extremely similar [十分相仪].” At the end of the interview, the ex-Soviet test pilot predicts that Russia will produce a new generation of jump jet that he projects will exceed the F-35B in capabilities. Interestingly, an August 2018 article in the Russian newspaper Izvestiya actually suggested that plans for a new Russian vertical take-off aircraft are in the works.

But this interview appearing in a popular Chinese naval magazine also prompts another thought. What if Russia and China combine their efforts on a STOVL fighter interceptor? Such a combination would put Chinese resources and methodical planning together with ample Russian experience and design genius. The rewards would seem to be obvious for both countries. Yet, STOVL aircraft hardly amounts to a simple project and the required level of trust and cooperation would indeed be daunting. True, Moscow and Beijing have already decided to team up on a heavy-lift helicopter and a host of other projects. It remains to be seen whether the two Asian giants will opt to increase the level of cooperation in the military-industrial sector to this new and much higher level.

Lyle J. Goldstein is research professor in the China Maritime Studies Institute at the United States Naval War College in Newport, RI. In addition to Chinese, he also speaks Russian and he is also an affiliate of the new Russia Maritime Studies Institute at Naval War College. You can reach him at [email protected]. The opinions in his columns are entirely his own and do not reflect the official assessments of the U.S. Navy or any other agency of the U.S. government.