Could China's Civilian Ferries Play a Role in a Taiwan Invasion? 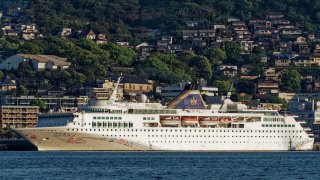 China appears to be improving its ability to transport troops, weapons, supplies, and heavily armed combat vehicles by using a large civilian ferry modified and ruggedized for operational military use.

It seems significant that the drill focused upon transporting these attack assets as far as a thousand miles. The civilian ferry operates with a large displacement of 45,000 tons, much larger than most Chinese Navy ships. This ferry could enable China to move large amounts of heavy combat equipment in support of an amphibious assault upon Taiwan.

However, a transport vessel carrying that many combat assets across a thousand-mile distance would easily be detected by radar systems and surveillance technologies originating from space, surface ships, or land locations. Therefore, an ability to truly obtain substantial tactical advantage or approach overmatch might be greatly challenged by counterattacks from the air, strikes from surface combatants, and even land-fired missile attacks. In short, a Chinese transport vessel of this size would likely be quite vulnerable to destruction from the air, surface, or undersea, given its large footprint and slower speed.

At the same time, a report in the Chinese government-backed Global Times newspaper says the ferry was able to transport large numbers of Type 96 main battle tanks, Type 04 infantry carriers, and “Dongfeng Menghshi” assault vehicles. An ability to transport large numbers of tanks would be critical to any kind of amphibious advance, particularly given that Taiwan is receiving U.S. Abrams tanks. However, a large, slower-moving ferry of this kind would not only be vulnerable to rapid detection but also be at great risk of being destroyed by allied platforms and weapons.

Certainly any ability to massively reinforce an amphibious landing would greatly favor Chinese chances to advance into Taiwan should it succeed in taking over the beach or establishing a landing point of entry for attack.  The ferry is not likely to get there fast enough, meaning U.S., Japanese and Australian forces would be well-positioned to see and destroy the ferry from the air or delay its arrival long enough to enable allies of Taiwan to intervene with defensive strikes. Given that a ferry of this size would seem to be easily detectable, then it certainly also seems likely that the Chinese ferry might be extremely vulnerable to destruction from U.S. or Taiwanese submarines in position to fire torpedoes.

Editor's note: This article mistakenly referred to the distance between Taiwan and China as 1,000 miles. The correct distance is approximately 100 miles. We regret the error.