Could Dust Defend Against Hypersonic Weapons? 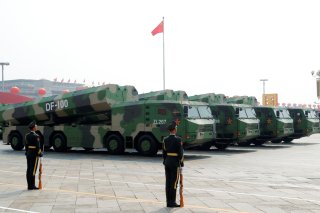 Perhaps one of the report's most intriguing findings is what the authors term twenty-first-century flak or “dust defense.”

Like the flak of World War II infamy, a twenty-first-century version could also rely on using physical matter to destroy hypersonic weapons.

The paper also quotes studies from the Cold War, noting that clouds of dust, rain, or other particles “removed significant nose tip material” from ballistic missiles traveling through the atmosphere during reentry.

A dust defense would not defeat incoming missiles by suspending large pieces of debris in the air. Instead, it would rely on the accumulation of damage that many smaller pieces of dust and grit would take on a high-speed projectile.

A hypersonic missile defense “might dispense engineered particles across a broader airspace early in a hypersonic missile’s trajectory, allowing damage to compound over time,” the paper explains. “The principle would be to temporarily saturate the domain in which hypersonic flight can take place.”

Tiny particles could be airborne for many minutes before falling back to earth or becoming too dispersed to be effective. As the authors note, because hypersonic attacks would be short and highly concentrated, the idea still deserves attention.

Directed-energy weapons have inherent advantages over “dust defense” or conventional kinetic weapons. First, magazine depth for energy-based systems is virtually infinite, and in some cases, cost per shot can be measured in cents rather than hundreds of thousands of dollars.

And while laser weapons have made significant progress in recent decades, they are no panacea. The report explains that current systems “may not be adequate for penetrating hypersonic thermal protection systems.”

The report adds that “prior analyses have suggested that high-powered lasers would be unable to effectively penetrate a ballistic reentry vehicle, which possesses less thermal shielding than a hypersonic system.”

Furthermore, the ability to penetrate the defenses of a hypersonic weapon quickly enough would require technology that does not currently exist.

The future of hypersonic missile defense is far from clear. However, what is more certain is that the defense is behind the offense. The solutions, though in their infancy, provide a way forward.