Could the F-35 Stealth Fighter Knock Out an ICBM With Lasers? 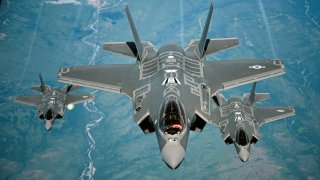 “We are now looking at how we could close the kill chain on that process,” officials familiar with the conversations told The National Interest.

The concept, according to industry insiders and Pentagon developers, would be to use F-35 weapons and sensors to detect or destroy an ICBM launch during its initial “boost” phase of upward flight toward the boundary of the earth’s atmosphere. The F-35 could employ a “kinetic” response where it destroys an ICBM or a “sensor” solution where it “cues missile defense systems.”

While Pentagon officials emphasize the F-35 program is currently focused on near-term efforts such as delivering software upgrades to the aircraft, there is a growing consensus that exploring F-35 nuclear missile defense is something of great potential benefit. Early conversations and conceptual work are already underway.

The prospect of using an F-35 for this purpose introduces an array of defensive possibilities not yet part of the Pentagon’s missile defense arsenal. For instance, an F-35 could launch air-to-ground ordnance to explode the ICBM, or use lasers and electronic warfare to incinerate, jam, or disable the ICBM’s flight trajectory. If an ICBM’s guidance system or propulsion mechanisms were disrupted, it might head off its path into the ocean or an uninhabited area.

Also, a group of F-35s could potentially form a networked “relay system” using the Multifunction Advanced Data Link (MADL) to deliver threat information to a fleet of aircraft in position to warn U.S. missile defense systems. This MADL data link, which enables a group of F-35s to see the same thing in real-time while conducting a mission, could potentially extend the range of systems able to find or detect an enemy ICBM. It goes without saying that the earlier combatant commanders and political leaders learn of an attacking ICBM, the more time they will have to implement countermeasures or launch a counterattack.

Many ICBM launch points developed by potential adversaries are lodged deep inland and heavily defended by air defenses, making them harder for certain weapons and attack assets to reach.

Also, a 2014 Congressional report produced by the U.S.-China Economic and Security Review, contained a seventy-page chapter on Chinese military modernization. Among its many findings, the report specifically cited Chinese “mobile” ICBM launchers with as many as ten “reentry vehicles.” These weapons present significant threats since multiple reentry vehicles approaching a target could nullify missile defense deployments. With this in mind, an F-35 might be able to use its stealth capabilities, speed, and maneuverability to operate above heavily defended inland areas to find, pursue, and destroy mobile launchers.

The initial launch, or “boost,” phase of an ICBM would present the best opportunity for an F-35 to have the intended missile-defense impact. Hitting an ICBM attack during the final, or “terminal,” phase would present challenges due to the number of reentry vehicles. All of this raises the question as to whether an F-35 could be part of an integrated system able to detect and knock out enemy ICBMs while they are traveling in space. While difficult, it might someday be possible for an F-35 to use GPS or other air-mounted sensors to interact with satellites, which could also fire laser interceptors to hit an ICBM during space flight. In this scenario, an F-35 would function as a sensor or networked “node” and not an actual attacker, per se.