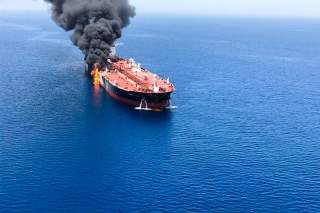 Though Iran’s Great Prophet-9 military exercise ended last month, you can count on Tehran’s military to wring every last drop of bellicosity from the event—such as showing off an apparently armed drone taking a bead on a ship crossing the Strait of Hormuz.

Iran conducted the exercise during the last week of February, and centered it around the theatrical, Michael Bay-esque destruction of a stationary wooden aircraft carrier prop floating off Iran’s Larak Island.

The fake Nimitz-like mockup, which Tehran reportedly used as a set for an upcoming film, served as an effigy of the U.S. Navy’s most iconic warship. American carriers are a constant irritant to Iran as they loom off its coast.

But the exercise contained another threat to a different U.S. strategic interest—shipping.

It was a subtle threat, and to figure it out takes some sleuthing. Helpfully, Iran recently broadcasted the drone’s surveillance footage and its coordinates on state television.

Here’s the footage—which shows video from the Shahed-129’s camera. Deputy commander Hossein Salami of the Iranian Revolutionary Guards Corps narrated the events from a studio.

The Shahed-129 outwardly resembles the British Watchkeeper and Israeli Hermes 450. The machine represents Iran’s foray into building a medium altitude, long endurance UAV—a larger, more capable vehicle than the tactical drones that make up much of Tehran’s arsenal.

As Salami’s rattled off the Shahed-129’s capabilities for the audience, the drone’s camera zoomed in on a ship. The footage included coordinates—meaning we can pinpoint where the drone and the ship were. We’ve created a shareable map with the coordinates.

The drone was above a ship transiting the Strait of Hormuz.

The strait is a narrow and crucial choke point for oil tankers as they leave the Persian Gulf on their way to markets around the world. Shut down the strait, and you can shut down a hefty chunk of the Middle East’s energy exports.

Threatening the closure of the strait is by no means a new tactic for Iranian officials. They’re well aware that disrupting or closing the straight would harm the U.S. and global economies. And to be sure, Iran positions its military accordingly.

During the 1980s “tanker war,” Iran and Iraq attacked shipping vessels that carried each others’ exports through the Persian Gulf. American sailors also got caught in the crossfire. During the war, an Iraqi Mirage jet struck the American frigate USS Stark with two Exocet missiles—and nearly sank her.

With sanctions against Iran’s oil sector in the works in late 2011 and early 2012, Tehran threatened to close the strait and warned the U.S. not to allow the aircraft carrier USS John C. Stennis to sail through it. Stennis ultimately made the journey, the strait remained open and Iran backed off its threat.

The IRGC has described the Great Prophet-9 exercise and its martial bravado as “backup for the Iranian nuclear negotiating team,” who are trying to reach an accord with the U.S. and its allies over the fate of Tehran’s nuclear program.

Whether the Shahed-129 could actually back up a threat to shipping in the strait, however, is up for debate.

The IRGC claims the Shahed is an armed drone—a UCAV—capable of firing Sadid air-to-ground missiles.

But there are reports that Iran has had trouble developing the Sadid because of sanctions. And while the Shahed has made appearances in Syria, there are no confirmed reports of the drone carrying out any air strikes there.

The footage broadcast on Iranian TV depicted the missiles attached to the Shahed’s wings. Indeed, Iranian troops fired a number of munitions at the wooden prop carrier, including rockets fired from speedboats, and cruise missiles fired from land and one from a helicopter.

However, none of the available footage has shown the Shahed firing its missiles. Like with many things involving Iran’s military, the weapons could just be for show.

But the footage does lend credence to claims that Qeshm—an Iranian island in the strait—is home to a UAV facility.

In June 2013, the Open Source IMINT blog published satellite imagery that showed a ground control station and pneumatic launcher on a runway at Qeshm. Iran uses similar hardware to launch and control Ababil and Mohajer drones.

The Shahed’s coordinates during takeoff placed it on Qeshm, albeit slightly north of the suspected runway.

In any case, we won’t be left wanting for more—now that Great Prophet-9 is over. Iranian Brig. Gen. Ahmad Reza Pourdastan has already promised a new round of exercises, this time for electronic warfare, later in March.