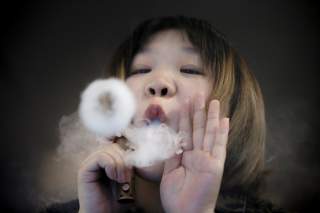 In what it hailed as a “breakthrough,” on November 8, the Centers for Disease Control and Prevention published the results of its analysis of lung fluid samples from 29 different patients hospitalized for vaping related illness in 10 different states. All 29 samples were found to contain vitamin E acetate, the synthetic form of vitamin E. Vitamin E acetate is an oil, and is suitable for ingesting, but can cause severe lung damage if inhaled.

Vitamin E acetate is commonly used as the vehicle for delivering THC, the psychoactive ingredient in cannabis, in vaping cartridges. The CDC reported that 86 percent of the patients sampled said they had vaped an illegal THC product. This was based upon self-reporting, so the actual percentage may be higher.

As long as federal marijuana prohibition continues, the only way for vapers to get THC-containing liquids is by making them on their own with cannabis products or buying them in the dangerous black market.

Vitamin E acetate is not used by legal e-cigarette cartridge makers because of its harmful effects on the lungs. Its presence in vaping liquid indicates a black-market source. The CDC report added, "it is possible that more than one compound or ingredient could be a cause of lung injury, and evidence is not yet sufficient to rule out contribution of other toxicants."

Dr. Michael Siegel, Professor at Boston University School of Public Health, stated in a blog post reacting to the news:

At this point, it is also clear that states which have issued emergency regulations to ban e-cigarettes or flavored e-cigarettes are not justified in using their emergency powers for this purpose since it is almost assuredly the case that those store-bought products have nothing to do with the outbreak.

I agree with Dr. Siegel. Moreover, as I have written before, vaping is a valuable harm reduction tool that has helped many tobacco smokers quit that very unhealthy activity. This is especially true with respect to flavored vaping, the choice of more than 90 percent of smokers trying to quit. One former tobacco smoker, who now vapes tells me, “Why should I choose tobacco flavored vaping liquid when I can experience the real thing from a cigarette?”

Banning flavored vaping liquids will just lead to more flavored products being made and sold in the black market, and it is obvious how dangerous that can be.

But there is another important message in the CDC findings. If policymakers want to take a big step in the direction of reducing vaping-related lung injuries and deaths, they should legalize marijuana. Consumers who purchase marijuana from legal outlets in states where recreational use is permitted, like consumers of alcoholic beverages, don’t worry that cannabis products may be laced with dangerous substances. Once marijuana is federally legalized, legitimate manufacturers of vaping liquids could provide better forms of THC-containing vaping cartridges and be held accountable for their safety.