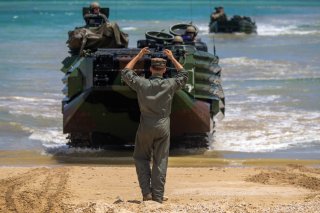 The Army’s Pacific-theater multi-domain land-air-sea task force seeks to refine technologies and concepts of operation. In particular, they are aiming to conduct joint operations with breakthrough levels of connectivity, high-speed data-sharing, and cross-service attack formations. The Army is also preparing to send new Robotic Combat Vehicle (RCV) prototypes to operational units for assessments and evaluations in combat scenarios. Considering these things, wouldn’t it make sense for them to integrate?

The Army’s multi-domain task forces in the Pacific are specifically formed to address anticipated threats in the region with a mind to connecting ships, helicopters, ground soldiers and even armored vehicles to one another amid changing combat circumstances. Why not add fifteen-ton robots to the equation? If lethal force is managed by humans performing in a command and control capacity, that is. This kind of networking can introduce an entirely new sphere of potential combat tactics in an island-hopping, coastal land-sea type of combat environment such as in the Pacific. Perhaps an exchange of gunfire on the surface of the ocean is fortified by suppressive fires, rockets or even artillery from an island within range of fire. Perhaps an island-based “firebase” of some kind has been set up to attack ships at sea?  Why not use multi-domain capable platforms to send armed robots in to destroy the firebase?

Thinking of this very scenario, there seems to be no reason why fifteen-ton armed Robotic Combat Vehicles could not travel on a U.S. Navy amphibious assault ship in support of a ship-to-shore attack mission. While not built to swim like an amphibious assault vehicle, fifteen-ton tracked robots could operate as deployable, unmanned mini robot tanks able to reinforce an amphibious landing into hostile territory with supportive fires, ammunition delivery, and reconnaissance support for attacking Marines.

Thinking in terms of logistics, there are several key reasons why this is possible. The Navy’s new Ship-to-Shore connectors are engineered to carry a seventy-ton M1 Abrams tank from ship to shore, so there is no reason why they could not transport several fifteen-to-twenty ton armed Robotic Combat Vehicles to follow on and support an amphibious landing. They could certainly transport on an amphibious assault ship and potentially deploy alongside Marines in a ship-to-shore attack.

There do not seem to be any logistical barriers to this type of equation, particularly given that the Pentagon continues to make rapid progress with its Joint All Domain Command and Control program which is establishing common technical standards and IP protocol such that air-sea-land platforms from different services can share data with one another in real-time across the force.

Such an approach would likely prove to be of great consequence in a Pacific war scenario such as in the South China Sea or areas around the Taiwanese or Japanese coastline. Part of the advantage of these RCVs is that they are armed, equipped with advanced computing and sensor technology while also lighter weight and more expeditionary than a manned combat vehicle.

With this in mind, isn’t the Marine Corps/Navy Light Amphibious Warship (LAW) program being designed for this kind of specific scenario? The new LAW is being built to “island hop” and deliver Marines and weapons platforms from land to sea and back to land quickly as combat conditions require. Amphibious assault vehicles, ship-to-shore landing craft, and the LAW are now being integrated into one another as connected combat platforms able to support these kinds of multi-domain missions.