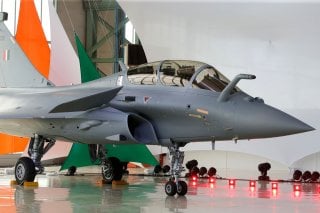 The first five of the Indian Air Force’s new Dassault fighters recently landed in India after a two-day flight from France. The fighters, from Dassault’s Rafale line, were piloted by Indian pilots and will enter service with India’s “Golden Arrow” squadron. According to Dassault, the pilots underwent extensive training in France along with their ground support crews.

It’s not the first time that Dassault has supplied New Delhi with state-of-the-art equipment—the company has supplied the Indian Air Force for more than six decades. Dassault notes that “the first Dassault Aviation aircraft, Toofani was supplied to India in 1953, followed by the Mystere IV, the naval Alize, the Jaguar manufactured under license by HAL (Hindustan Aeronautics Limited, an Indian aerospace firm), and the Mirage 2000. These aircraft have contributed to Indian sovereignty all along and the Mirage 2000 fighter aircraft continues to be the IAF’s ‘cutting edge’ till date.”

Dassault advertises the Rafale as an “omnirole” fighter, capable of a variety of missions that include interception, air-to-air combat, close air support, deep and maritime strike capabilities, reconnaissance—and most importantly—nuclear deterrence. The Rafale F3 is the primary nuclear aircraft in French service, and would presumably provide India with similar capabilities.

This most recent order, a total of thirty-six Rafales, is part of a $8.7 billion contract that was inked back in September of 2016. New Delhi and Paris left the door open for thirty-six additional Rafales that could be purchased at a later time. The initial airframe batch included both eight two-seat and twenty-eight single-seat Rafale variants.

The Indian Rafales are built to Dassault’s F3-R standard, though with a number of additions tailored to Indian operational requirements. India’s Rafales are particularly well-equipped for missions in some of India’s mountainous, high-altitude terrain. In addition to improved optronics, modifications include a radar altimeter that assists with over-mountain flight, and a modified cold weather engine start. These changes could give India an edge in high-altitude fights.

Dassault’s modified Rafales could not come at a more opportune time for India, a country that is sandwiched between an archival to the west, Pakistan, and a strategic competitor to the east, China. Both countries have recently clashed. In February 2019, an Indian Air Force pilot was shot down while at the controls of an older MiG-21 Bison, a Soviet-era plane that first flew in the late 1950s and is ancient by fighter standards.

In June, India clashed with China along the Chinese-Indian border near Ladakh, in Kashmir. Approximately twenty Indian soldiers died from wounds sustained during the fighting, with an unconfirmed number of Chinese troops killed or wounded.

While the Indian-standard Rafales may not alter the strategic balance of power in the region, it could help push the scales slightly in India’s favor. India has a not-inconsiderable amount of experience fighting at altitude—and now has the modern equipment to back up the tactics. Combined with the French airplanes’s ability to carry nuclear weapons, India could be getting a particularly powerful new addition to their air capabilities.