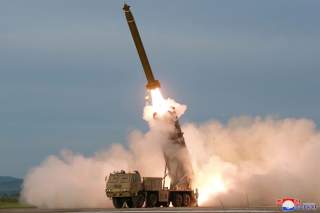 However, while North Korean technology is relatively primitive—the nation’s air defenses are coordinated. “They do have an old Soviet computerized anti-aircraft command and control system. Most of the radars are old, but they did receive some newer Iranian phased array radars,” Kashin said. “This is what I know, the anti-aircraft units are extensively using underground shelters for cover—not easy to destroy.”​