Could One of America's Allies Take Down the F-35 Program? 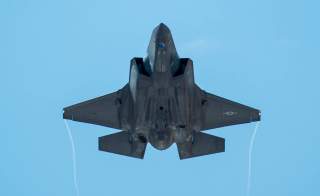 What does America need to save its troubled F-35 stealth fighter?

Turkish President Tayyip Erdogan recently warned that the multinational F-35 program, of which Turkey is a member, would fail if Turkey were excluded. Turkey is facing sanctions, including being dropped from the F-35 program if it goes ahead with purchasing Russia’s S-400 anti-aircraft missile system, which has raised Washington’s fears that F-35 secrets might be leaked to Russia. The U.S. has stopped shipping equipment to Turkey for that nation’s planned purchase of 100 F-35s, while the first two aircraft officially delivered to Turkey are still in the United States.

For its part, Ankara is adamant that it has a right to purchase both American stealth fighters and Russian anti-aircraft missiles, despite the fact that the S-400 is one of the most likely Russian weapons to be used against the F-35. “We were surely not going to remain silent against our right to self-defense being disregarded and attempts to hit us where it hurts,” Erdogan said at a Turkish defense trade show. “This is the kind of process that is behind the S-400 agreement we reached with Russia.”

“Nowadays, we are being subject to a similar injustice - or rather an imposition - on the F-35s ... Let me be frank: An F-35 project from which Turkey is excluded is bound to collapse completely.”

How credible is Erdogan’s warning? “If the Turkish supply chain was disrupted today, it would result in an aircraft production break, delaying delivery of 50 to 75 F-35s, and would take approximately 18 to 24 months to re-source parts and recover,” former Secretary of Defense James Mattis warned Congress last year.

Neither F-35 manufacturer Lockheed Martin nor the Pentagon’s F-35 program office responded to queries from The National Interest.

“Additionally, Turkish Industry are going to have significant Industrial Participation role supporting Lockheed Martin and Pratt and Whitney for F-35 aircraft sustainment and F135 engine production and sustainment,” Lockheed Martin said. “Turkey has been given the approval to build its own F135 engines and was also selected to have the first European Regional F135 Engine depot overhaul capability.”

The Pentagon says it is already looking for new suppliers should Turkish manufacturers become unavailable. Richard Aboulafia, an aviation analyst at the U.S.-based Teal Group, says the Turkish suppliers could be replaced fairly easily. “Sole-source means that as long as the country is in the program, they get to build that particular component without fear of displacement,” Aboulafia told The National Interest. “But if Turkey is kicked out, it merely becomes a question of how quickly those roles can be replicated, and there's really nothing terribly complex or irreplaceable in the roster of Turkish components.”

“Let's hope it doesn't come to that,” Aboulafia added. “After all, Turkey is an important ally, and I'm not sure how the damage from all this could be undone.”

As for the impact on Turkey, Turkish defense analyst Arda Mevlütoğlu believes U.S. sanctions on T from the F-35 program would be “devastating.”  “Turkey is still reliant on many areas, such as subsystems, components and technologies, on the U.S. and Europe,” Mevlütoğlu told The National Interest. “Turkey’s relations with many European countries are problematic and it is safe to assume that many, if not all, European contractors will not want to be seen doing business with a sanctioned Turkey. According to official figures, more than 90 percent of imports of Turkey’s aerospace and defense industry are from U.S. and Europe.”

What about replacing the F-35 with Russian fighters? “Many circles in Turkey advocate for going for Su-57 or Su-35,” Mevlütoğlu said. “Russia also presented a scale model of Su-35 during IDEF 2019 defense exhibition in Istanbul two weeks ago, a possible hint that Russia is pitching for this model to Turkey.”

“But the Su-57, despite the fact that its export variant is cleared for promotion, is not fully ready as a product. I personally find it unlikely that Turkey goes for Russian fighter aircraft instead of F-35. It will create enormous burden on the budget in terms of infrastructure, logistics, training, weapons etc., let alone the mandatory major transformation of doctrines, strategy and tactics.”

Indeed, it is hard to see a winner – other than Russia - should Turkey be ejected from the F-35 program. That would be one less customer to defray the cost of an already-expensive aircraft, and it might cause concerns among future customers who use Russian or Chinese equipment. For Turkey, it means the abandonment of a project that has cost it over a billion dollars, forfeiture of a chance to operate one of the world’s most sophisticated aircraft, and a cloud over the American-Turkish relationship and future arms agreements.