Could Poland’s Abrams Tanks Be More Helpful in Ukraine? 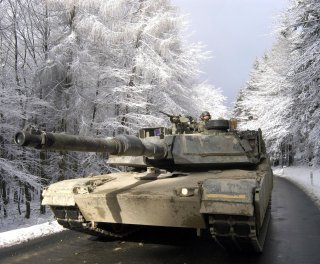 The United States is set to deliver 250 M1A2 SEPv3 Abrams tanks to Poland following the country’s large Foreign Military Sales deal earlier this month. The tanks’ arrival will be a major development for Polish defense planners, who say that they will immediately send the tanks to deter Russia in the country’s east.

But these tanks could serve another purpose: aiding Ukraine. Would Poland agree to send the tanks further east? Given Polish readiness to support Ukraine’s defense, it is certainly possible. The Abrams bound for Poland could simply travel a bit further to the east and south to support the Armed Forces of Ukraine. The tanks would certainly be useful for Ukraine, whose armed forces are currently transitioning from the hit-and-run, dispersed combat that characterized Russia’s assault on cities like Kyiv to a more conventionally-oriented fight in the Donbas to the east.

If the U.S.-built Abrams tanks are sent from Poland to Ukraine, they could be then backfilled by additional production (though this would depend on General Dynamics being able to generate more new variants for export). Certainly, time is of the essence; Ukraine cannot sit and wait while the United States builds additional units of its M1A2 SEPv3 variant, and it is unlikely that available tanks are lying around. Yet, even if this is logistically possible, it does not mean the Pentagon would have the appetite to do this. Russia has already warned that it considers Western arms convoys to Ukraine to be “legitimate targets”; avoiding the start of direct conflict between the United States and Russia a la World War III remains a top U.S. priority.

However, several Eastern European countries have upgraded Russian T-72 tanks which may rival portions of Russia’s large but aging tank fleet. The Czech Republic is reportedly sending T-72 tanks to Ukraine. Germany’s Leopard 2 tanks are yet another possibility, but would Berlin be willing to part with some of its most cutting-edge armor?  Germany has been reluctant to send heavy weapons thus far.

Then there is the question of impact. Global Firepower reports that Russia operates as many as 12,000 tanks, however, their potential effectiveness is dependent on how many of them have been modernized and properly maintained. Russia operates a small number of new T-14 Armata tanks, but has mostly T-90 and T-72 Soviet era tanks. These have already proven vulnerable to Ukrainian anti-armor fire.

What if the Ukrainians were able to operate upgraded T-72s to repel a heavily mechanized Russian invasion? By extension, what about the Abrams tank? A former battalion leader in the famous U.S. Army 3rd Infantry Division, who led units which attacked and destroyed the Iraqi Republican Guard at Baghdad airport during Operation Iraqi Freedom (OIF), said that Iraqi T-72s could not compete with the Abrams tank in warfare engagements.

“There was no comparison, the capabilities, the night vision or you know, the mobility, the firepower that exists, and most importantly, the crew and the crew dynamics for us to be able to take advantage of training systems,” Retired Lt. Col. Scott Rutter, OIF and Gulf War Army veteran who is now the CEO of the Valor network, told Warrior Maven in an interview.