Could Russia Be Planning Another Invasion? 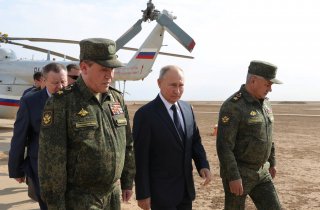 The United States and other countries responded with sanctions, leading to a period of strained U.S./Russian relations, culminating in the Russian interference in the 2016 presidential election.

But is it possible that Vladimir Putin could move to invade another neighboring country, likely one that was part of the former Soviet Union?

Leon Aron, a resident scholar and director of Russian studies at the American Enterprise Institute and a Boris Yeltsin biographer, has argued in an op-ed published by Politico that “many of the same vectors that produced the invasion of Ukraine are here again.” These include “deeply held beliefs and perceptions, bleak economic prospects, and the exigencies of his regime’s survival.”

Putin is also, per Aron’s argument, eying further glory for both himself and Russia, and that such an invasion would strengthen his position, as he eyes another term starting in 2024. Putin’s approval ratings increased significantly following the 2014 invasion.

Aron also suggested that Putin could potentially invade another neighboring country, like Georgia, Moldova, Belarus or Kazakhstan, or even Estonia, Latvia and Lithuania.

“Could there be a more satisfying coda to Putin’s desire to recover past glory, a more condign retribution for the fall of the beloved Soviet motherland, than a feat that even the mighty Soviet Union could not pull off?” Aron wrote. “A victory over the alliance that embodies the democratic West’s solidarity and its will to defend itself? A be-all and end-all roll of the dice that would expose NATO as a paper tiger?”

How would such an invasion work? Likely similar to how the Ukraine invasion did in 2014. Aron sees that as “a tight, Crimea-style ‘hybrid’ operation by mostly special ops forces and elite paratroopers drawn from Russia’s Western Military District: three special forces regiments and the air assault division currently deployed close to the Estonian and Latvian borders.”

Aron also argues that NATO would be unlikely to respond to such an invasion quickly, citing a recent Estonian Foreign Intelligence Service report that Russia enjoys an “absolute supremacy” in tanks, fighter aircraft and rocket artillery.

It should be made clear, however, that Aron is not predicting an invasion based on any hard intelligence or inside information; the op-ed is merely based on conjecture in relation to current circumstances.

“Is it Baseless Fear-mongering Week over at Politico?,” Daniel Larison, an editor for conservative magazine The American Conservative, wrote on Twitter in reaction to the piece.

“If Putin were to undertake any military escalation in the near-future, it will be in eastern Ukraine, not in the Baltics, as argued here. Still, this piece ignores the unique circumstances that marked early '14 and the many opportunities for early warning,” University of Waterloo professor Alexander Lanoszka tweeted in reaction.