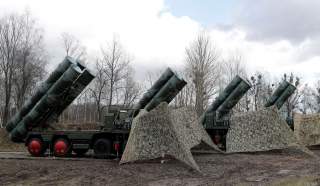 Key point: The B-21 is a powerful and modern weapon system, but so is Russia's new S-400 system.

Kris Osborn previously served at the Pentagon as a Highly Qualified Expert with the Office of the Assistant Secretary of the Army - Acquisition, Logistics & Technology. Osborn has also been an anchor and on-air military analyst for national TV networks. This first appeared in 2018.