Could Russia's 'Stealth' Parachutes Be a Real Threat? 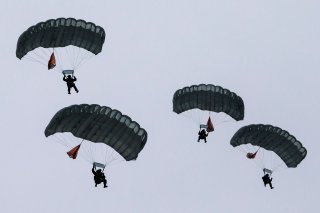 According to TASS, the Russian News Agency, a firm called the Technodinamika Group is pioneering the technology.

“The effect of chemical spraying for making the parachute invisible for night vision devices on the physical properties of basic fabrics used in the manufacture of parachute systems’ canopies and cords and, correspondingly, the possibility of their use in producing materials for the canopies of parachute systems, are now being studied,” the Technodinamika chief said, according to the report in TASS.

The TASS report goes on to state that a “stealth effect is achieved by applying special saturating techniques at the stage of producing polyamide threads and fabrics.”

While it may not be known if U.S. military technical efforts parallel or mirror this in any way, the prospect of such a technology could potentially challenge U.S. night-vision supremacy. The well-known and often discussed U.S. military phrase “we own the night” is indicative of the combat success made possible for U.S. forces by using what are believed to be the most effective and technically advanced night-vision goggles in the world.

Air assaults in open-field areas, activities normally quite visible to night vision or other kinds of defensive sensors such as radar or infrared systems, might pose much greater risks should this kind of technology come to fruition. Large numbers of infantry could infiltrate an area with less chance of being detected.

However, even if parachute materials are stealthy, it might not mean the heat signature emitting from soldiers themselves would also be undetectable. Therefore, the actual tactical utility of stealth parachutes may ultimately be somewhat marginal, given that thermal sensors will likely have little trouble detecting the heat signature emitting from the humans dropping with the parachutes.

However, some ground-operated thermal sensors might not be able to detect approaching air assault forces at the same longer distances at which radar might be able to detect objects. However, just as a radar return signal can detect an airplane, incoming weapon or attacking drone, radar signals can also detect humans. This again reinforces the possibility that, ultimately, stealth parachutes may have little actual impact.