Could Russia's T-14 Armata Tank Be Headed to India? 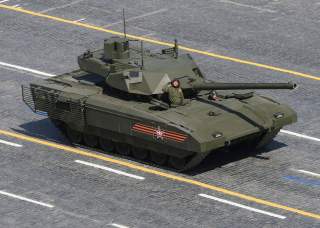 The Indian Army is one of the largest operators of Russian tanks in the world. According to IISS, it currently fields almost 2000 T-72s of various variants and nearly 1000 T-90Ss. But the older T-72s are aging, despite efforts to modernize them.

To replace them, India has launched the new Future Ready Combat Vehicle (FRCV) program. This program aims to replace the T-72 in Indian service. The Indian Ministry of Defense (MoD) submitted a Request for Information (RFI) in 2017. The possible value of the FRCV program is very large, India expects to acquire around 1700 of the selected tank.

The requirements for FRCV are listed in the RFI. One interesting requirement is weight: the FRCV is not to exceed 57.5 tons. The report also suggests that the armament be a 120 millimeter or 125 millimeter main gun, which should be able to penetrate 650 millimeter of armor at two kilometers and fire at a minimum rate of six rounds per minute.

The RFI also lists detailed requirements for the sight, some of which include new technology. Both the commander and gunner’s sights must have the capability to track targets automatically. Interesting, a thermal channel is not listed as a requirement for the stabilized commander sight. It is required for the gunner’s sight.

Protection wise, the RFI requires the tank to have around 800 millimeter RHAe resistance in the frontal arc, have an active protection system and multispectral smoke launchers. Interesting, the RFI requires all ammunition to be stored with “suitable safety measures”. Blow-out panels are listed as an example of what such measures might be.

Mobility wise, the FRCV is mandated to have a horsepower to ton ratio of 25:1, and have an engine of at least 1500 horsepower. An auxiliary power unit is also required, one with enough power to operate mission critical systems (navigation, sights, communications) for six hours.

In addition to the technical requirements, the RFI requires that the winner engage in “comprehensive” transfer of technology regarding the design and manufacture of the winning vehicle. This includes “obsolescence management, life extension, and subsequent integration” efforts that would involve the winning vehicle.

So what vehicles in the world currently fit these requirements?

Russia’s T-14 Armata now appears to be the front-runner in the FRCV competition. Early in October 2018, Indian Army Chief General Bipin Rawat went to Russia for a six-day visit to strengthen defense ties with Russia. While it has not been officially confirmed, both The Diplomat, The Economic Times and Sputnik News have speculated that the T-14’s place in FRCV was a point of discussion during the visit.

The T-14 is an ideal tank for FRCV since its technical characteristics match those of the FRCV’s requirements. Unlike Western tanks, it’s well under the weight limit at 48 tons. It possesses a high pressure 125 millimeter gun that can fire advanced rounds that can penetrate in excess of 650 millimeter with APFSDS projectiles. It also possesses advanced sighting systems that meet the FRCV’s requirements.

However, there may be a big blocker when it comes to Armata’s selection for FRCV. Sputnik’s quotes the entire deal to have a price tag of 4.5 billion dollars, which would average to around 2.5 billion per tank. The cost of the Armata is quoted as being 4 million per tank, which would put it above what India might be willing to pay for the tank.

But the other tanks that are presumably being considered for the FRCV are even worse in these aspects. The K2 Black Panther squeaks under the weight limit at 55 tons, but it costs a whopping 7.5 million per tank, almost three times what India might be willing to pay.

The Ukrainian BM Oplot might be cheaper, while also fulfilling the weight limit, but it’s unsure whether the Ukrainians can deliver APFSDS ammunition that fulfills the requirement. The slow delivery of Oplot-Ts to Thailand may also cast doubt on the ability for Ukrainian industry to deliver the tanks in a timely manner.

There’s also the looming threat of American sanctions. Since the United States has threatened to apply sanctions to India if it buys S-400s, the same threat may apply to Armata if applied to the FRCV deal. India seems willing to take or try to negotiate around the S-400 sanctions however, so they’re likely to do the same with the Armata if it is selected.