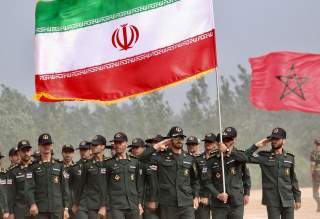 Key point: America can still do more to hurt Iran economically. However, more damage does not necessarily mean that Tehran will fall.

The United States, reacting to the shooting down of a U.S. unmanned aerial vehicle last week, launched two sanctions-related salvos against Iran on June 24. It layered sanctions on top of those already targeting commanders in Iran's Islamic Revolutionary Guard Corps (IRGC), which are unlikely to have more than a limited effect on the Iranian economy. The second set of sanctions, targeting Iranian Supreme Leader Ayatollah Ali Khamenei and his appointees, could bite much deeper than typical sanctions issued by the United States by hampering Iran's engagement with the world and damaging its economy.

An Executive Order Lays the Groundwork

An executive order signed by U.S. President Donald Trump freezes all property subject to U.S. jurisdiction that is held by Iran's supreme leader or the supreme leader's office. In addition, the order allows the U.S. Treasury Department to similarly sanction any person or entity the supreme leader, or his office, appoints, such as a state official or the head of an entity such as a company leader. The order also extends that connection a step further, allowing sanctions to be placed on any appointment made by an appointee of the supreme leader, as well. It also threatens sanctions against anyone who provides support for people or entities sanctioned under those designations.

The Treasury Department has yet to designate anyone under those sanctions, although Treasury Secretary Steven Mnuchin said that Iranian Foreign Minister Javad Zarif would be sanctioned later this week. There is no shortage of potential additional targets. After all, Khamenei has made thousands of appointments including key members of the Iranian government and its military and intelligence apparatus. His appointments also cover Iran's so-called bonyads, or religious charities, and other businesses that make up a vast business empire.

The sanctions directly on Khamenei — who does not travel overseas — will probably have a negligible effect, but sanctions on bonyads and companies could further restrict the Iranian economy. But perhaps just as important, the sanctions could hamper any future efforts between Tehran and Washington to make a deal.

Iran's Foreign Ministry said that the new sanctions could lead to a "permanent closure" of diplomacy with the United States. While the statement might be extreme, sanctioning Zarif and Khamenei will make it more difficult to even broach a new set of negotiations — and in the case of Zarif even perhaps inhibit his ability to perform some of his broader diplomatic functions. In April, the White House made another major move potentially affecting Iran's diplomatic abilities when it designated the IRGC as a foreign terrorist organization. But along with the sanctions, exceptions allowing diplomatic activities by current and former IRGC members were created. The United States will likely put similar mechanisms in place in sanctions against Zarif. But if it chooses not to, Iranian diplomatic activities would be severely curtailed as long as Zarif is in place.

Moreover, beyond the symbolic value of designating Khamenei for sanctions, it will have a real effect on Iran's ability to engage in further talks with the United States, as its entire political system is based on the concept of velayat-e faqih(governance of the jurist). Those in the White House who advocate taking a hard line against Iran could see the sanctions designations surrounding Khamenei and Zarif, and the complications of possibly removing the IRGC from the terrorist list in the future — as an opportunity to make it more difficult — if not impossible — for diplomatic relations between the United States and Iran to resume, even after the current U.S. administration leaves office.

An Economic Move With Teeth

Bonyads and other entities connected to the supreme leader play a key role in the Iranian economy. While many of them do not hold substantial overseas assets, the entities account for an estimated one-fifth of Iran's non-oil gross domestic product and operate in a wide number of industries that import and export products. This means the second- and third-order effects of hitting these entities — if done in a broad way by the Treasury Department — could further strain the already fragile Iranian economy and its financial system. It is not clear to what extent Washington is willing to place sanctions on Execution of Imam Khomeini's Order, the Mostazafan Foundation, the Astan Quds Razavi, or any of the other bonyads and entities connected with Khamenei — but it is clear that Iran hawks in the United States will advocate that those businesses be included.

Despite the limited reach of the United States to directly affect some areas of the Iranian economy with sanctions, it does have room to add effective secondary sanctions. It could, for instance, widen the net for secondary financial sanctions and threaten to sanction third-country banks that deal in certain transactions covering Iran's imports and exports. For example, the United States reserves some of its strongest moves against third countries to use against those buying Iranian oil. Washington has also looked at sanctioning the domestic Iranian counterpart to the European-backed financial channel facilitating humanitarian trade.

No U.S. option — short of sanctioning Iran's entire diplomatic corps — can deal the same blow to Iran's economy as sanctions hitting its oil sector. But the fragility of Iran's economy makes every channel it can use potentially damaging.

Sanctions on Iran's Supreme Leader Go Beyond Symbolism is republished with the permission of Stratfor Worldview, a geopolitical intelligence and advisory firm. This first appeared in 2019 and is being reposted due to reader interest.